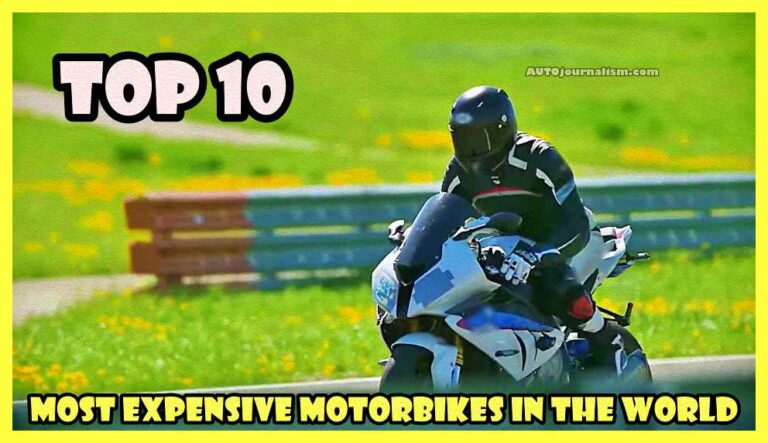 Top 10 Most Expensive Motorbikes in the World

In this article, I’m going to show you the top 10 most expensive motorbikes in the world Now here is a list of some of the most expensive motorcycles on the planet, whether for transportation or simply because they are more valuable than your car, these bikes will keep you engaged and make people envy when they see them roll up, so let’s get started.

Being behind the wheel of a powerful sports car is thrilling, but it pales in comparison to the rush of riding a motorcycle.

It has a strong sense of liberation about it, but it is not for everyone. Even unusual are those who can actually afford the incredible bikes we’re about to show you:

List of Top 10 Most Expensive Motorbikes in the World

140 000 dollars in value The NCR Leggera 1200 titanium special takes the Ducati hyper motor and improves it based on their own frames with zerg silencers for those who want to be loud or stealthy as they please fully adjustable all in suspension that can handle anything you throw at it from mountain roads to twisties and everything in between.

Brembo brakes should not be overlooked. This bike only weighs 328 pounds, so if you’re planning an adventure, you won’t have to worry about packing too much.

One hundred and sixty thousand dollars is the value of this item. Based on a strong and elegant four-cylinder engine from Suzuki, the icon Sheen motorbike pays homage to one of the most iconic individuals in racing history. This bike has enough power for riders eager to create their own legend.

The only 52 will ever exist as they cut through traffic or take down other competitors with ease, making them highly sought after by individuals who seek that distinct look while also having top performance characteristics.

worth 185 000 dollars The y2k turbine superbike is an incredible piece of engineering that has been named as the fourth best motorcycle ever by the Discovery Channel’s greatest ever program. The 500-pound machine is powered by a helicopter-designed engine that can run on anything from diesel to kerosene or jet fuel.

So you won’t have any trouble getting this monster up and running; it’s highly powerful, with pricing ranging from $185, 000 to $200,000, depending on the fuel supply needs in your location.

two hundred thirty-two thousand dollars in value The Ducati Desmosedici rr was already one of the most powerful and quickest street-legal motorcycles ever produced.

So when NCR engineers set out to create an even more impressive machine, they went right back into production with their lightweight carbon fiber and titanium diet plan for the bike, leaving it at only 145 kilograms. The m16 will set you back 160 000 on top of your original material investment, but don’t let that deter you from getting yourself a sweet ride.

valued at $300,000 The Ecosse Titanium Series FE Ti XX is a high-end luxury motorcycle from the firm. The 2409 cc billet engine generates 225 horsepower and weighs only 350 pounds.

Those looking for luxurious finishes on their motorcycles without necessarily going over budget will have to settle for Berluti instead of this model’s three hundred thousand dollar price tag, which can be considered quite steep even by high standards such as these, thanks in large part to materials like carbon fiber or titanium that were extensively used during the construction process for weight reduction purposes.

BMS choppers have taken a Yamaha Roadstar and converted it into something quite spectacular. The 2.5-meter cruiser is already a pleasure to behold, but what if you add gold plating to it?

That’s precisely what BMS did with their newest product, which is called after the company’s founder, Sam Nema, as well as being simply necklaces since that sounds so frightening, which was totally on target when designing such aggressive yet stylish-looking machines worth over $500,000.

675 thousand dollars in value AJS was a British motorcycle manufacturer that had a lot of success in the first part of the twentieth century. One of its products, the e95 porcupine, is exceptionally uncommon, especially for a 60-year-old bike, with only 4 500 built.

A single 1954 prototype model by AJS can make your investment worth more than gold as these vintage racing bikes are virtually non-existent nowadays due to high demand among collectors all over the world who want nothing but pure history when they purchase something like this historic piece from Great Britain’s ones.

If you’re a rapper or a luxury brand, you already know that gold improves everything. Lauge Jensen, a Danish motorcycle customizer, built Goldfinger with this simple premise in mind.

worth 850 000 dollars Goldfinger is a bespoke bike with an 1807 cc two-cylinder engine that delivers 90 horsepower at 3200 rpm and costs 000. Though there are diamonds studying the frame of this motorcycle to make everyday riding more joyful for you, the bling isn’t cheap.

To turn an object into a work of art worth a million dollars, you must have the financial means to do so. At one million dollars each bite, the Harley-Davidson motorcycle painted by artist Jack Armstrong, who goes by the alias cosmic existentialism, is the most costly item that has been made into art, and people say celebrities don’t drive anything.

however, gas Gustlers Artists can improve their value by making everyday goods into pieces of art, such as motorcycles, which are frequently traded on eBay for hundreds, if not thousands, more than they’re worth because each owner desires something different about them.

over a million dollars in value Tt Custom Choppers’ taran Telly developed the world’s most costly bike with his one-of-a-kind design. medusa This 125 HPV twin engine has an archaic but powerful 1.8-liter capacity and is mated to a six-speed transmission that propels the monster’s 700 pounds.

What makes it even more astounding is its extensive usage of gold throughout construction, ensuring that not too much weight rests just on the frame alone, which is valued at over a million dollars, making him the king of all cylinder heads as well a very wealthy guy today.

So this is the List of Top 10 Most Expensive Motorbikes in the World, Hope you like it and share it with your friends, Thanks for Reading.

Top 10 MRAP Vehicles in the World