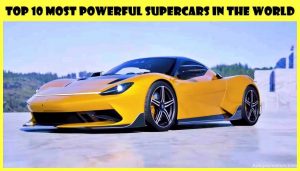 Top 10 Most Powerful Supercars In The World

At number, 10 ranks the hypercar with four seats, which is honestly an unheard concept that Koenigsegg has managed to pull off with the Gemera. The car is powered by an otherworldly three-cylinder engine that produces a remarkable 590 hp. Amplifying the total output are three electric motors which take the combined output to 1700 hp, thereby helping the ultra-limited car reach a top speed of 250 mph and sprint from 0-60 mph in just 1.9 seconds. Only 300 units of the Swedish hypercar will ever be produced, with each unit carrying a price tag of $1.7 million.

Holding the 9th spot is the SSC Tuatara. American supercars usually don’t get as much spotlight as their European counterparts, but this particular sports car has managed to do so albeit in a controversial way. In October 2020, the company claimed that the car had broken the 300-mph barrier which later turned out to be a hoax. Nevertheless, the twin turbocharged V8-powered car produces 1750 hp which is nothing short of amazing. Also, the 0-60 mph mark is claimed to be achievable in 2.5 seconds. The aggressively chiseled American beast is limited to only 100 units and the per unit price is set at $2 million.

The Hennessey Venom F5 secures 8th place although it is largely an under-development car. The hypercar boasts an incredible power output figure of 1817hp that can be fully unleashed upon switching to the F5 model. All this power has been made possible thanks to the use of a giant 6.6L V8 powerplant that is still going through various refining stages. The top speed test hasn’t been performed yet, but the company aims to have achieved 311 mph in the final stage of testing. The 0-60mph time was recorded at 2.5 seconds in simulations. Only 24 examples would be built, of which each would cost upwards of $1.8 million.

At the 7th slot, lies a car made by Bugatti, the world’s best hypercar maker. The 1850 hp Bolide is in some ways the successor of the famed Chiron, however, the bonkers fast heir will only be a track-specific machine. The iconic W16 engine still powers the track-only hypercar, though the tweaks have allowed it to unleash its true potential. With an astonishing weight of only 1,240kg, the French supercar catapults to 60mph from a standstill in just 2.1 seconds, and the top speed is expected to touch 311 mph. The car flaunts an equally mind-boggling price tag of $4.8 million and only 40 examples will ever see the light of day.

This German hypercar occupies the 6th slot and is made as a tribute to the founder of the Italian car design firm Pininfarina. Utilizing the battery packs supplied by Rimac, the car is propelled by four individual electric motors that combined put out close to 1900 horses. Unsurprisingly, it clocks 0-60mph in 1.8 seconds and the top speed is electronically limited to 217 mph. The head-turning beast of beauty is all crafted by hand and the total production is set at 150 units, each carrying a sticker price close to $2.5 million.

The Rimac Nevera has managed to come at 5th position in the list which is no mean feat. The silent supercar can churn out an astonishing 1,914hp which is more than enough to make anyone’s head spin. Resultantly, it rockets from 0-60mph in just 1.85 seconds and has a top speed of 256 mph. Another surprising feat of the car is its ability to run for 340 miles on a full charge with minimal degradation in performance. The lightning-fast electric car will cost $2.4 million and over 150 examples would ever be produced.

This Lotus Evija holds the 4th position in the realm of most powerful cars and it’s the result of the brand’s renewed determination to become a leader in the performance-packed cars category. The British supercar is powered by an electric powertrain comprising four motors that produce a total of 1972 hp. Being proclaimed as the fastest production car, it’s not hard to believe that the 0-60 mph time is projected to be under 3 seconds while the top speed is touted to be above 200 mph. Letting you fully enjoy the performance is the car’s unique ability to charge its batteries from 0-80% in just 12 minutes. This one-of-a-kind car would set you back $2.3 million and only 130 would ever be made.

At 3 spot shines the Japanese marvel, which is pretty much limited to the development process currently. However, the production version of Aspark Owl has already been unveiled in 2019 and the brand hopes to make the hypercar the fastest accelerating car in the world. Powered by an all-electric powertrain, it packs 1,984 hp and hits 0-60 mph in claimed 1.7 seconds. The top speed is set to match rivaling hypercars and is therefore set at 249 mph. A production run of 50 vehicles is planned with production taking place in Italy, the home of supercars. The price is set at an eye-watering $2.6 million.

The Chaos boasts the 2nd ranking which is rather out of the ordinary since Greeks aren’t known for making ultra-fast cars. The specs perfectly resonate with the car’s name since it produces a mammoth 3000 hp. What’s more surprising is the fact that almost all the power is extracted from a gasoline V10 engine, only a tiny portion is pumped up via a secret hybrid system. The 0-60 mph time is measured to be just 1.55 seconds while the maximum speed is over 310 mph. However, the most eye-opening number is the price. A single unit of Chaos will be priced at $14.4 million and a total of 100 will be produced.

The Devel 16 ranks first amongst all the contenders and this has been made possible after it was recently spotted on the Italian roads doing test runs. The V-16-powered car is reportedly capable of releasing 5007 hp, though such power has made it difficult to keep the engine cool and to keep the car on the road. Nevertheless, simulation testing shows a 0-60 mph figure of 1.8 seconds and a top speed of 320 mph. Worthy to mention here is the fact that there’ll be two versions, a track-only and a road-legal version which will, in fact, be a de-tuned variant. Production is still shrouded in uncertainty, though the estimated price tag of track-version will be $2 million.