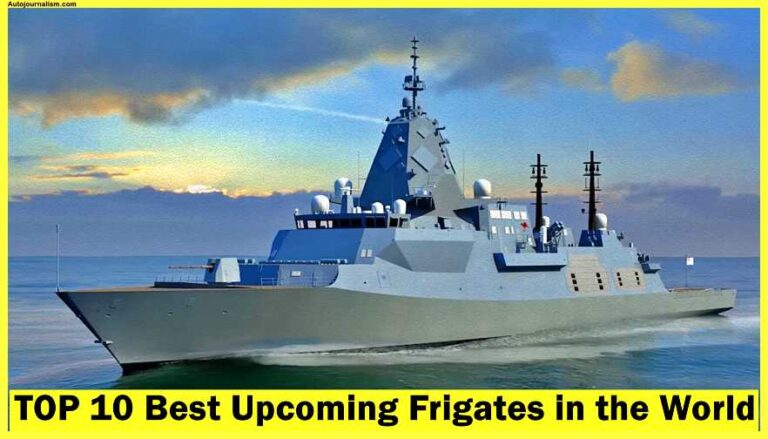 List of TOP 10 Best Upcoming Frigates in the World

The table provides the list of the TOP 10 Best Upcoming Frigates in the World along with their Specifications.

Now that you know the world’s TOP 10 Best Upcoming Frigates with Specifications, let us learn a little bit more about them in detail.

FFX III frigate is a new class of lightweight anti-air warfare (AAW) frigate to be commissioned by 2024-2025 for the Republic of the Korean navy. The class is expected to consist of six vessels to be built by Hyundai Heavy Industries while Rolls-Royce will deliver the MT30 Gas Turbines, which will serve as the major propulsion system for the ships. Batch III will be 129 m in length, and 15 m in width, displace 3,500 tons and have a maximum speed of 30 knots. Its major armaments include a Mark 45 5-inch main gun, ship-to-ship missiles, and a new close-in weapons system.

meaning of this is ‘Frigates of intermediate size’. This is a French military program to design and create a planned class of frigates to be used by the French Navy. At the moment, the program consists of five ships, with commissioning planned from 2023 onwards. The FTI medium-size frigate will feature a modular design with increased self-defense and long-range capabilities. It will incorporate digital technologies for data processing and detection of evolving threats and will be armed with a variety of anti-aircraft and anti-submarine armaments to attack aircraft and submarines and their crew.

The Hunter class frigate is a future class of frigates for the Royal Australian Navy to replace the Anzac class. Construction is expected to begin in 2020, with the first of nine vessels to enter service in the late 2020s, maybe 2027. The Program is expected to cost 35 AU$ billion. The class will have an 8,800-tonne full load displacement and will be approximately 149.9 m in length. The vessel will be capable of sailing in excess of 27 knots and will have a full complement of 180 crew. It will be able to carry one MH-60R ASW helicopter and has the ability to host other Australian aircraft such as the MRH90 helicopter.

MKS 180 / F126 Frigate also known as F126 Frigate. This is a new multi-purpose combat ship being developed for the German Navy. It is planned to be commissioned by 2027. The ships are to be the largest surface warships to join the Navy since World War II. MKS 180 frigate will have an overall length of 160m and a displacement of 10,000 tons. It will be capable of performing maritime surveillance and embargo control, including boarding, military evacuations during a crisis, escorting merchant ships, and leading task forces at sea, and can support self-defense and combat missions.

The Mogami-class frigate is also known as 30FFM, 30FF, 30DX, or 30DEX. This is a Japanese multi-mission stealth frigate for the Japan Maritime Self-Defense Force. Construction of the Mogami began in 2018 and a total of twenty-two units is planned by 2032. Weapons include a Mk 45 gun, two remote weapon stations above the bridge, 16 Mk 41 VLS at the bow, 8 anti-ship missiles, one SeaRAM, an SH-60L helicopter, torpedoes, and decoy launchers. It will have a length of 133 m and a displacement of 5,500 tons when fully loaded.

Istanbul-class frigates are a planned group of four frigates for the Turkish Naval Forces. Developed under the MILGEM national warship program, this class is an enlarged version of the Ada class which feature a slightly larger hull for improved endurance and a Mark 41 vertical launch system for multi-role capability. The Istanbul class will have twice the number of anti-ship missiles and will be equipped with the Mk.41 VLS, capable of firing Atmaca, HISAR, RIM-66 Standard, RIM-162 ESSM, and VL ASROC missiles, along with other systems for improved multi-role combat capabilities.

Type 31 frigate is a planned class of frigate for the United Kingdom’s Royal Navy intended to enter service in 2027. The Type 31 ship will have a length of approximately 140m, a displacement of more than 5,700t, and the capacity to accommodate 105 crew members. The new warship features a unique modular design that supports different configurations to meet the demands of the Royal Navy as well as allied navies across the world. The Sea Ceptor advanced naval air defense system will be integrated into the frigate for protection against existing and emerging threats

The Nilgiri-class frigate is a series of stealth guided-missile frigates being developed for the Indian Navy. This frigate’s design incorporates a significant degree of stealth and low radar observability. A total of seven ships will be built and the construction of the first ship started in 2017. The ship will have a length of 49 m and a displacement of 6,670 tonnes. The weapons platform in the Project 17A ships will be compact and they will be armed with the Barak 8 and BrahMos. The construction times will be reduced and productivity will improve by using modular integrated construction.

Type 26 frigate or City-class frigate is a class of frigate being built for the United Kingdom’s Royal Navy, with variants also being built for the Australian and Canadian navies. It is expected to enter service in 2028. The program, known as the Global Combat Ship, was launched by the UK Ministry of Defence to partially replace the navy’s thirteen Type 23 frigates, and for export. Its primary role is to conduct advanced anti-submarine warfare missions while supporting air defense and general-purpose operations. The type is the first naval platform shared between Australia, Canada, and the United Kingdom since the Tribal-class destroyer.

The constellation-class frigate is a class of multi-mission guided-missile frigates under development for the United States Navy as a follow-on to the modular littoral combat ship. In January 2019, the U.S. Navy announced that this new frigate will have a minimum of 32 Mark 41 Vertical Launch System cells aboard the ship for primarily anti-air warfare for self-defense or escort missions. The U.S. Navy would like for the ship to be able to: Destroy surface ships over the horizon, Detect enemy submarines, Defend convoy ships, Employ active and passive electronic warfare systems and Defend against swarming small boat attacks.