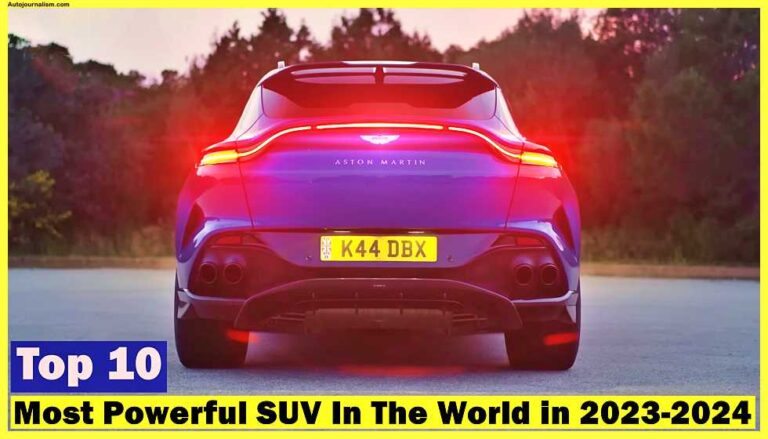 TOP 10 Most Powerful SUV In The World

Today in this article we will give the list of the TOP 10 Most Powerful SUV In The World in 2023-2024 with Specifications, In today’s time, everyone wants to buy such as well, but the matter of powerful SUVs is different, the one who has a powerful SUV, hardly anyone can stop him from going somewhere like he can go on a mountain, go on an adventure. or race anyone. So let’s know about some of the best and most powerful SUVs in the World 2023-2024.

The table provides the list of the TOP 10 Most Powerful SUV In The World in 2023-2024 along with their Specifications.

Now that you know the world’s TOP 10 Best and Most Powerful SUV In 2023-2024 with Specifications, let us learn a little bit more about them in detail.

The Cadillac Escalade-V is the first SUV to wear the Brand’s V badge it has a similar 6.2 liter V8 as ct5v Black Wing but a larger supercharger than its predecessor as a result the all-wheel drive SUV pumps out 682 horsepower and 653 pound-feet of torque making it the most powerful production Cadillac ever with the help of standard all-wheel drive and a 10-speed automatic transmission the three-ton SUV will reach 60 miles per hour in under 4.4 seconds and continue through the quarter mile in 12.7 seconds, the 2023 Escalade V price starts at $149,195.

The Mercedes-Benz EQE EV SUV is the first all-electric SUV to get an AMG badge in the EQE 53 SUV version combined with the AMG Dynamic Plus Package race start and boost modes will increase power to 687 horsepower and 738 pound-feet of torque helps the 2.7-ton electric SUV hit 62 miles per hour in just 3.5 seconds and reach a top speed of 150 miles per hour features all-wheel drive and rear-wheel steering is standard with a 90.6-kilowatt hour battery the EQE 53 AMG SUV’s range is estimated at 233 to 294 miles on a full charge.

The Aston Martin DBX 707 is the most powerful version of DBX it features some exterior differences in both front and rear that improve aerodynamics and Aesthetics compared to the regular version it’s based on the standard DBX but output from the AMG twin-turbo V8 has been turned up to 697 horsepower and 663 pound-feet of torque power is routed to a rear-biased all-wheel-drive system via a new wet clutch 9-speed automatic gearbox with a seven percent shorter final drive the super SUV will reach 60 miles per hour in just 3.1 seconds and has an incredible top speed of 193 miles per hour making it the fastest luxury SUV pricing for the 2022 DBX 707 starts from $239,000.

Dodge Durango SRT Hellcat possesses a muscular appearance a powerful engine and spacious space with a six-seater three-row that can help your whole family go fast to any place with the ability to Sprint to 60 miles per hour in just 3.6 seconds it’s capable of Towing up to 8,700 pounds it features a 6.2-liter Supercharged V8 engine that makes 710 horses and 640 pound-feet of torque Powers routed to all four wheels through an 8-speed automatic transmission pricing for the Dodge SUV starts from $92,780.

Ferrari does not consider the Ferrari Purosangue an SUV for Ferrari the Purosangue Italian for Thoroughbred is simply a sports car with a look of a crossover under the hood the super SUV is equipped with a naturally aspirated 6.5-liter V12 engine that produces 715 horsepower and 528 pound-feet of torque without even a hint of electrification it uses all-wheel drive via an 8-speed dual-clutch transmission mounted in the rear like the company’s GT models the front to rear weight distribution is 49-51 the SUV boasts an impressive 0-62 time of 3.3 seconds and 0 to 124 time of 10.6 seconds before reaching a top speed of 193 miles per hour the super SUV from the Prancing horse brand will be produced in limited quantities and cost around $390,000.

As the top of the range is due to be unveiled in the fall of 2023 the label red boasts 738 horsepower and 738 pound-feet of torque from the 4.4 liter twin-turbo V8 plug-in hybrid engine power will be sent through an 8-speed automatic transmission to all four wheels there’s no performance info yet but the label red will definitely beat the XM’s 0-62 time of 4.3 seconds and a top speed of 168 miles per hour the combined fuel consumption of the BMW XM label red is only about 1.4 to 1.7 liters per hundred kilometers while the power consumption is approximately 30.4 to 32.4-kilowatt hours per 100 kilometers the XM label red will be priced from $185,000 up from the standard model starting at 159,995 dollars.

As the SUV version of the Hummer EV, the Hummer EV SUV retains the design philosophy of the pickup combined with the aggressiveness of the H2 H3 in the past similar to the pickup the Hummer EV SUV uses an Ultium chassis with a limited edition one configuration at the time of sale the starting price of Edition 1 is $105,595 and will be put into assembly from the beginning of 2023. the additional one is powered by three electric motors with 830 horsepower and 11,500 pound-feet of torque as announced by GM but the actual number may be only around a thousand to eleven hundred pound-feet however this power is enough to propel the car to 60 miles per hour in just 3.5 seconds with a huge 200-kilowatt-hour battery pack the SUV can go for more than 300 miles on a full charge foreign.

Similar to the Hummer EV SUV the r1s shares its battery pack powertrain much of its styling and many of its specs with its r1t pickup sibling with 835 horsepower and 908 pound-feet of torque the r1s feels Mighty quick a 0-60 time of just three seconds and Tow up to 7 700 pounds with a 128.9-kilowatt-hour battery pack the electric SUV could go 316 miles on a full charge the top-spec r1s starts at $91,075.

The Tesla Model X Plaid is Tesla’s Flagship 7-seater electric SUV featuring a Sleek design and outstanding performance it’s equipped with three electric motors that produce 1020 horsepower and 752 pound-feet of torque thanks to this new 2022 system plaid boasts an impressive 0-60 time of just 2.5 seconds and reaches a top speed of 163 miles per hour with a 95-kilowatt-hour battery pack the car can go 311 miles on a full charge pricing for the model X plaid starts from $140,000.

At the top of the list is the Drako Dragon electric SUV from Drako Motors the startup pounded in 2013 and is headquartered in San Jose California it was introduced at the 2022 Los Angeles Auto Show it has four electric motors that produce a whopping 2 000 horsepower with a zero to sixty mile per hour time of just 1.9 seconds quarter mile times of nine seconds and a top speed of over 200 miles per hour figures comparable to hypercars its chassis is also made of carbon fiber which reduces weight by 50 percent compared to a traditional SUV Construction this hyper SUV can go 420 miles on a full charge Draco wants to sell it for $290,000, of course, these are all numbers on paper we have to wait until 2026 to see if they can do it.