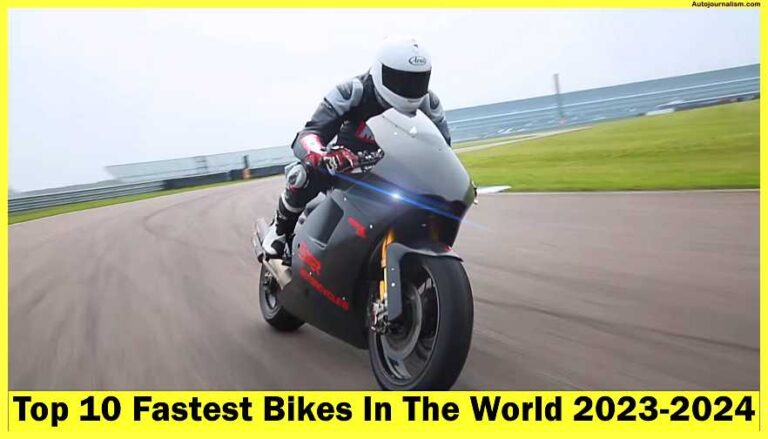 It is a special bike with a 127 kg weight and 195 HP of power that is made for riders to enjoy themselves while riding. The bike can be steady because of this. It makes sense why it cost the amount stated above. The superbike has a record of 18 victories in the Ulster Grand Prix race, 8 victories in the North West 200, and 10 victories in the Isle of Man TT. This bike is among the best ever made and one of the fastest on the market right now.

Suzuki Hayabusa’s top speed is approx 311 kilometers per hour when we talk about fast motorcycles Suzuki Hayabusa will definitely be on the list of so many people the Hayabusa just like most of the street legal production motorcycles has its top speed electronically limited to 186 miles per hour the new Hayabusa can go from 0 to 60 in less than 3.2 seconds and it is powered by the four-cylinder 1340cc four-stroke four-cylinder liquid-cooled DOHC engine that is able to produce more than 170 horsepower and 150-newton meters of torque at about 7 000 rpm but if you’re willing to throw some cash to get rid of that speed limiter this can go even faster back in the late 1990s the Suzuki Hayabusa would be something that was only possible in science fiction but when it became a reality it ended up being the fastest production motorcycle back when it was launched in case you are wondering the Hayabusa is a Japanese name for the peregrine falcon that travels at a speed of 242 miles per hour.

54 global championships and 7 World SBK titles have been won by the bike. The superbike is intended for those who enjoy riding quickly. With its strong performance, it will be among the world’s fastest bikes in 2023. The bike is a fantastic illustration of sportiness because it is light, strong, swift, and powerful.

In terms of performance, this bike is among the fastest in the entire world. It is the first electric superbike made by Damon, an e-motorcycle manufacturer with a location in Vancouver. The motorcycle has a 360-degree Advanced Warning System that is patented. By tracking using CoPilot intuitively and using haptic feedback on the handlebars, integrated LEDs on the windshield, and the 108p rearview rear-facing camera, the system alerts riders to potential danger.

It is the only street-legal motorcycle and the most extreme superbike ever built by Ducati. Only 500 motorcycles were made, yet they are some of the quickest bikes in the world in 2023. The Desmosedici GP16 winglets, which are made of carbon fiber, provide 110 Ibs of downforce at 168 mph, allowing the vehicle to stay on the ground while being driven.

The bike, which is on the list of the top fastest bikes in the world in 2023, is the first electric bike to accelerate excessively. This bike is an electric one with a variety of battery pack choices. A battery pack ranging in size from 12 kWh to 20 kWh is available for the superbike. When utilizing a rapid charger with a regular wall outlet, the battery takes 30 minutes to fully charge. The seat has a distinctive design that makes use of bespoke graphics wrap to make it appear updated.

what if we told you that there is a bike with a helicopter engine with top speed approx 227 mph, well that’s right with the MTT Y2K Turbine Superbike,  this motorcycle has got two Guinness world records under its name as the most expensive production motorcycle ever and also the most powerful production motorcycle marine turbine technologies is the company behind fitting a helicopter engine into a street legal motorcycle which resulted in the world’s most powerful production bike the MTT Y2K Turbine Superbike,  the very first generation was powered by a Rolls-Royce Allison gas turbine engine that produced 320 horsepower and 576.2-newton meters of torque this bike can go as fast as 260 plus miles per hour all of the MTT motorcycles are produced in-house by its engineers and manufacturers including most of the bike parts the newer generation y2k 420rr is equipped with the Rolls-Royce Allison 250-c20 series gas turbine for an engine that produces about 420 horsepower at 52,000 rpm and it produces 677.9-newton meters of torque making this bike a true monster.

kawasaki ninja h2r top speed is approx 400 kilometers per hour the Kawasaki ninja h2r is another engineering marvel from japan don’t let the 998 cc engine fool you because this engine is a lot more powerful than you think it is this engine produces 305.75 horsepower and 165 newton meters of torque with a top speed of 248 miles per hour the engine is mated to a 6-speed transmission the Kawasaki ninja h2r has always been in the headlines for being a one-of-a-kind Japanese motorcycle it took more than three years to design the Kawasaki ninja h2 to be the predecessor of the h2r this Kawasaki superbike is not a road bike because it is only limited to tracks as of now all thanks to its mind-boggling powertrain that puts out insane numbers the technology that the Kawasaki packs would make it one of the most advanced motorcycles in the market but to ride something as powerful as this Kawasaki you need to be highly skilled and trained the Japanese really outdid themselves this time with the Kawasaki Ninja H2R.

The bike is produced in Louisiana by MTT Company. It is the first street-legal turbine-powered motorcycle ever made. One of the quickest bikes in the world in 2023, thanks to its race-ready design. Diesel and kerosene are combined to power the motorcycle. For its part, the combination of carbon fiber makes it lightweight, and the machine’s large wheelbase contributes to its stability. It has a rearview camera and an LCD screen.

1. Dodge Tomahawk – The Fastest Power Bike In The World

Dodge Tomahawk is the fastest power bike in the world. It’s built for speed, not comfort. It’s designed to take you places fast, whether you’re riding around town or racing down the highway. And it’s built to last. You’ll find that it’s comfortable enough to ride long distances, yet durable enough to withstand years of abuse.

The Tomahawk was created to be the ultimate urban commuter bike. Its lightweight aluminum frame makes it quick off the line and its upright position puts you closer to the ground than any other bike. It’s perfect for navigating city streets and commuting to work. Plus, it comes equipped with a powerful Shimano drivetrain, hydraulic disc brakes, and wide tires that provide excellent traction. It is an exceptional motorcycle and the fastest heavy motorcycle in the world with a ten-cylinder powerful engine. Its special tires have entirely independent suspension systems in each, which help the bike withstand stress. There were just 9 bikes made in total.

Thanks for reading this article.