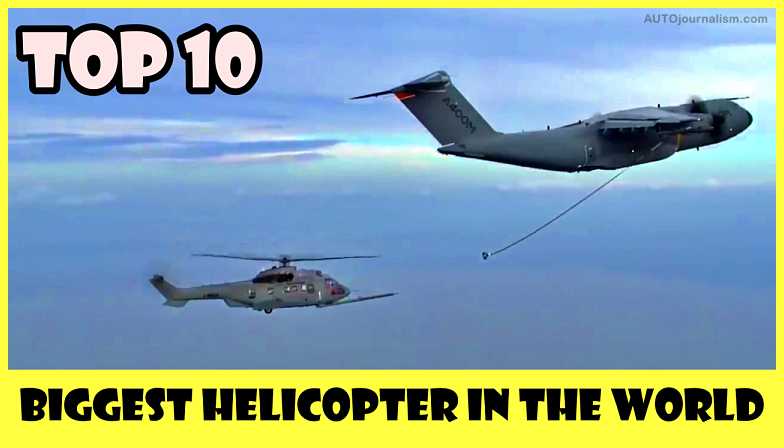 Top 10 Biggest Helicopter in the World

Here is the list of the Top 10 Biggest Helicopter in the World, Helicopters are an essential aspect of military forces all over the world; they may make or break all types of military operations by delivering transportation and supplies to locations that would otherwise be inaccessible. Helicopters enable military forces to explore difficult terrain and deliver critical supplies in even the most adverse weather circumstances. Since Igor Sikorski built the first helicopter, producers have worked to make helicopters larger than their predecessors. This raises the question, which is the world’s largest helicopters? Let’s have a look at ten of the world’s largest helicopters.

This military utility medium-lift helicopter has an armored crew seat and a blade main rotor. Its design was developed with an emphasis on durability and impact resistance, transforming it into a top military aircraft. Because of their vast freight and passenger capacity, models of the aw 101 have also been built for commercial usage.

The Changhe Z-18 is a new Chinese military transport helicopter developed by the Chang aircraft industry group. The Changhe Z-18’s design evolved from that of the Harbin z8 and features more powerful engines and an optimized fuselage. The z18 is more capable of flying efficiently at higher altitudes than its predecessor and is nicknamed the White Heron. While in service with the Chinese air force, it is additionally equipped with an electronic flight instrument landing system.

The z18 is a utility helicopter that has served in a variety of missions, including freight and personnel transportation. The z18 has a length of 23 meters, a width of 6.66 meters, and a height of 7 meters. The z18 was meant to transport 6800 kilos of freight or 27 people.

Since its launch in 2005, the Airbus Helicopters H225M Caracal has gained popularity, serving in the militaries of ten different nations across 14 military branches. The h-225m was developed by Eurocopter to be 19.5 meters long, 3.6 meters wide, and 4.6 meters high. These proportions allow the h-225m to transport 28 personnel or 5670 kilos of cargo.

The Mi-38 is a transport helicopter intended for both military and civilian users. It was initially planned as an enhanced version of the me-8, but there are so many differences that the Mi-38 is a whole new design rather than an improved version of the v8. It is equipped with modern airframe engines, a rotor system, and avionics. It may be seen as a new generation of the me-8. In 2017, it launched small-scale manufacturing. It was stated in 2018 that a series of Mi-38 manufacturing had commenced, with the first production helicopter scheduled to be handed to the Russian military in 2018. for missions involving passenger transportation

This helicopter can carry up to 32 troops, 5,000 kilograms of cargo internally or 7,000 kilograms externally, making it larger than the Mi-17 and the Mi-38. Various versions of the Mi-38 are planned to be produced for different missions; equipment may be fitted for an emergency landing on water, and it can also be used as an ambulance mill designed the Mi-38 to be one of the largest helicopters in the world, operating in both cargo and troop transport roles.

Many engineers created some rather strange aircraft designs during the post-World War II era and the onset of the cold war. The Cot 22 was no exception; unlike its British counterpart, it was the first aircraft to take off like a helicopter and cruise like an airliner. Rhodamine, the Fairy Rhodamine The cot-22 did see some use initially intended as a military-heavy transport helicopter competing with the likes of the me6 the cot 22 was one of the biggest helicopters ever made comparable to the me6 the cot 22 was one of the largest helicopters ever manufactured

Even if it did not see widespread use as hoped, part of the reason was that it was too large to be safely handled. The cot 22 was 27 meters long, 23 meters wide, and 11 meters high, with one of the best ranges and cruising speeds for any aircraft, making it ideal for cargo use. There are no surviving co-22s to this day.

The v-22 osprey is not a helicopter; rather, it is the world’s first operational tilter. The Osprey combines the vertical lift capabilities of a helicopter with the flight speed of a fixed-wing turboprop aircraft. It is used by the United States Army, Air Force, Marine Corps, and Navy. Despite being one of the most deadly military aircraft, the v-22 is nevertheless one of the most often employed military cargo aircraft. Inspired by concepts such as the cop22, Bell created an aircraft that could take off like a helicopter and cruise like an airplane.

This naturally has numerous military uses, similar to how the harrier and cot22 were used or were expected to be used as freight and personnel transport by militaries all around the globe. As such, when Bell and subsequently Boeing collaborated on the design of the v22, they developed it with massive proportions. The v-22 is 17.48 meters long, 25.8 meters wide, and 5 meters tall. Because of these proportions, the v-22 can transport 24 to 32 personnel or 9070 kilos of cargo, making it one of the most versatile helicopters on the globe.

Many people think of the Chinook when they think of the largest helicopters. After all, the Chinook is one of the most frequently utilized helicopters employed by dozens of armies and civilian cargo airlines, ranking among the heaviest lifting Western aircraft. The Boeing Boeing CH-47 Chinook has a slew of new and enhanced capabilities, including a cutting-edge digital control system that is tailored for bad weather situations. It quickly became the helicopter of choice for the United States Army because of its pulling power and agility.

The chinook is likely the most well-known tandem-rotor helicopter, closely followed by the ch-46 variant and the yak-24. The chinook’s fame is well-deserved, as it has been used in multiple conflicts and has been produced for over 50 years. Most commonly, the chinook is used as either a cargo or transport helicopter, so Boeing designed the chinook to be 16 meters long, 3.78 meters wide, and 5.77 meters tall, making it the second-longest helicopter ever produced.

If centerline seats are provided, the navy may even utilize some of them to replenish onboard supplies. Sikorsky developed the ch-53 king to perform well in this duty, therefore it is 26.97 meters long, 4.7 meters wide, and 7.6 meters high, with a cargo capacity of 15,900 kilos.

When it comes to the largest helicopters in the world, the Mil Mi-26 is frequently listed as the largest. This heavy multifunctional transport helicopter is built to ferry exceptionally heavy equipment and goods to distant places that other aircraft cannot access. The Mil Mi-26 features two strong turbine engines that power eight blade rotors, allowing it to lift other helicopters, airplanes, and military trucks. The Mil Mi-26 was created to be Russia’s and its allies’ primary heavy-lift freight helicopter.

However, many retired mil me 26s, like the ch-53 and the chin oak, have become favorites of western cargo helicopter airlines due to the Mi 26’s intended role mill designed the Mil Mi-26 to be both tall long, and wide as such the Mil Mi-26 is 40.25 meters long 8.2 meters wide and 8.45 meters high making it the largest and most powerful helicopter to ever enter widespread service.

The Mil V-12 was a prototype heavy-lift helicopter that would have entered service as the Mil Mi 12. However, it was scrapped before it could enter mass production, despite the fact that it is the biggest helicopter ever built in many aspects. The Mil V-12 initially flew in July 1968 and appeared to be the replacement for the Me-6, but it was canceled since the Soviet air force was no longer interested in it owing to its planned mission.

The Mil V-12 was designed to be tall, long, and wide. It was 37 meters long, 12.5 meters high, and had a wingspan of 67 meters, making it the largest helicopter in terms of size. If the Mil V-12 had entered service, it would have been able to transport 20,000 kilograms of cargo or 196 passengers. There were also plans for the Mil V-12 to be converted into a passenger helicopter for Aeroflot, but neither of these plans came to fruition.

Ch47: I can lift light vehicles and small tanks.

Mi26: I can lift u and heavy tanks together.