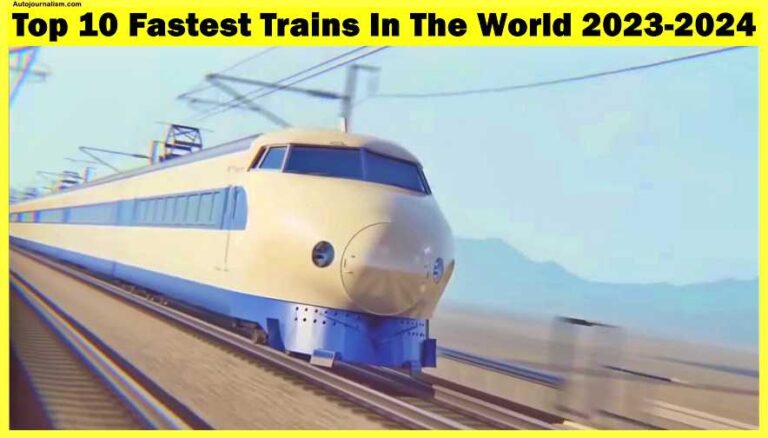 Today in this article we will discuss the High-Speed Train and the Top 10 Fastest Trains In The World 2023-2024, as we all know planes are often considered the fastest mode of Transport however the time that it takes to travel to the airport go through the security baggage process and more surely adds a few hours to your journey this is where high-speed trains Stand Out Railway stations can be located in or near the city and hence you aren’t required to leave your home before two hours and more, So in this article, we will discuss the list of top 10 fastest trains in the world.

The table provides the list of the Top 10 Fastest Trains In The World 2023-2024 along with their Top Speed and Specifications.

Now that you know the world’s Top 10 Fastest Trains 2023-2024 with Specifications, Top Speed in Miles and Kilometers, etc. let us learn a little bit more about them in detail.

Created originally in Italy in 2013 the Frecciarossa 1000 is an impressive train that can reach a top speed of 248.5 miles per hour or 400 kilometers per hour. this feat is attained by the Train’s powerful 16 engines within the eight coaches, it boasts not only is this locomotive Speedy but it is also safe for both the environment and travelers on board equipped with technology to ensure both limited CO2 emission and speed the Frecciarossa 1000 is an ideal choice of travel for passengers who want to get from place to place at a fast but safe Pace this locomotive barely scratches the surface for high speed when it comes to other trains.

With a recorded speed of up to 250.8 miles per hour or 403.7 kilometers per hour, this Spanish train was built in 2001 with a length of 656 feet the Siemens Velaro E can hold a total of 536 passengers within the eight cars that make up the Train the train reached, it’s tops feedback in 2006 and held the Spanish record for the fastest train speed however that record was later beaten but its consistent speed it’s still fast enough to be considered among the fastest trains even today the Simon’s Feller OE has a very Sleek look the kind that looks like the backdrop for an action Blockbuster movie like bullet train appears to be.

Manufactured in China in 2017 the Fuxing Hao CR 400AF boasts 260 miles per hour or 418 kilometers per hour. top speed this massive 16-car train stretches over a thousand feet long which makes, its top speed an even more impressive feat but perhaps the most remarkable trait of the Fuxing Hao CR 400AF is the fact that it made, its top speed at negative 40 degrees Celsius temperature this cold temperature and during train would be a perfect fit for the setting of a social sci-fi movie like snow piercer, it is a large powerful train that can roar through China at a frightening pace.

Originating in South Korea in 2010 this 484-foot six-car train has officially traveled at a top speed of 267.2 miles per hour or 430 kilometers per hour. the cars were all made out of aluminum and boast the dimensions of 12.2 feet tall and 10.2 feet wide the train can fit a total of 381 passengers and cost a grand total of 79.69 million dollars, it was certainly a labor of love created by the Hyundai Rotem group The HEMU-430X lives up to its name very well as HEMU stands for high-speed electric multiple units a top speed of 267.2 miles per hour certainly backs the name sank up well and shows the world yet another high-speed train for the masses to ride.

The Shanghai maglev was created in 2010 in China and has been named the fastest commercial train of 2022. this 504-foot long train can fit 574 passengers in Roars to life over the tracks at a top speed of 268 miles per hour or 431 kilometers per hour. the Train’s cost is roughly 1.2 billion United States dollars which is why few passengers choose to take it compared to other trains despite its feed the train levitates over the track using electromagnets instead of a wheel or a traditional track and slide is called the maglev train by traveling at its high speed the Shanghai maglev train can travel a 19 Mile Long track in merely 8 minutes.

Yet another train created in China in 2010 the CRH380A Hexie has reportedly reached a top speed of 302 miles per hour or 486.1 kilometers per hour. however, the operational speed is much slower at 217 miles per hour 350 kilometers per hour there’s a second type the EC which is the same as the CRH 380a but shorter the CRH380A Hexie is yet another example of a long but very fast car giving Chinese passengers another reliable and fast option within the train station the train is the second fastest train in China and is one of the world’s fastest making it a great option for passengers with just how spacious it is.

The TGV POS is a truly fast train car clocking in at 357.2 miles per hour for its top speed yet has the slowest operational speed at 199 miles per hour or 320 kilometers per hour the train was first manufactured in France in 2006 a great year for Classic Movies the train consists of two main cars and eight trailers all of which combined to fit a grand total of 485 people within the fast speeds at which this train travel allows it to travel all over Europe not only in France the TGV POS is a great option for travelers looking to travel far at a quick rate.

Manufactured in 1996 up until 2001 the Jr Central mlx01 maglev trained surges into Japan stations at a top speed of 361 miles per hour or 581 kilometers per hour. the length of the train varies from about 330.9 feet to 490.3 feet due to the fact that the train fluctuates between having three to five cars attached at a time per ride yet despite the fluctuating amount of cars the train has a measly capacity of 68 passengers the combined forces of the maglev and MLX which stands for magnetic levitation experience give the train a boost in speed and reduce aerodynamic resistance the train has broken many world records in the past and it was at one point the world’s fastest train.

CRRC Qingdao Sifang 2021 Maglev Known as the fastest train in China the CRRC Qingdao Sifang 2021 Maglev maglev is a truly powerful force with a top speed of 373 miles per hour or 600 kilometers per hour. as the title of the train States, it was created at 2021 a remarkable year for superhero films the train can have as few as five cars and a maximum of 10 and can hold over 900 passengers at a time a great encouragement for people who hate being crowded on a train despite the large passenger count the train is a positive reputation for being safe when partnering safely with speed and high capacity, it makes the train one of the most attractive to ride out there, it is also a great alternative for those who do not like to fly.

The king of speed when it comes to trains Japan’s L0 Series Maglev just barely beats out the competition with its highest speed being 375 miles per hour or 603 kilometers per hour. the Japanese train was created in 2012 sporting a total of 12 train cars which contributes to its 981 feet of total length like the previous entry the l-0 series maglev has both a large capacity and high speed holding up to 728 passengers Japan’s l0 series maglev gives other maglev trains a good name by being the fastest train out there, it is also very intelligent and efficient train with a long nose on the front of the train that reduces drag and energy consumption this train can go ridiculously fast and has been a popular facet of Japan’s technology which helps its case as the Undisputed king of fast trains in 2022.