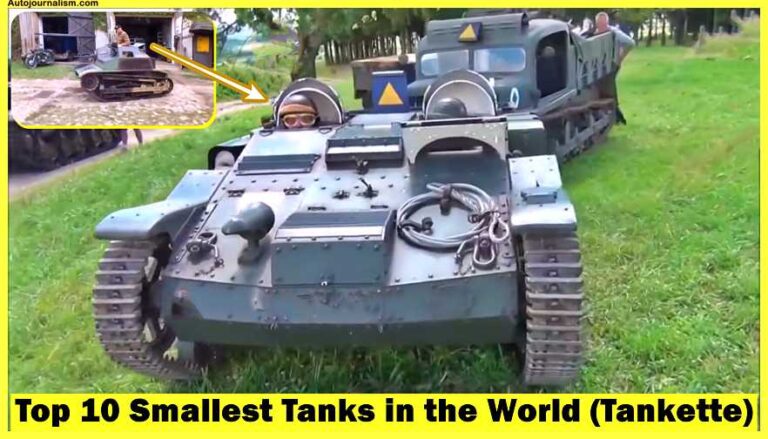 In this article we will discuss the Top 10 Smallest Tanks in the World (Tankette) with Specifications, A small tank in the military is called a tankette it is a tracked armor Fighting Vehicle about the size of a car it looks like a small tank and is mostly made for supporting infantry and scouting between the 1920s and the 1940s tankettes was made in several countries armies eventually gave up on the idea of small tanks because their light armor made them easy to damage tankards were made two to three man models.

Some were so low that the person had to lay down and some models didn’t have turrets at all or they had very simple ones that could be moved by hand or foot they were much smaller than light tanks and didn’t have a tank gun instead they usually had one or two machine guns or in rare cases and other Cannon or grenade launcher as their main weapon today let’s take a look at the 10 smallest tanks ever made in World War II.

List of Top 10 Smallest Tanks in the World (Tankette)

The table provides the list of the Top 10 Smallest Tanks in the World (Tankette) along with their Specifications and Images.

Now that you know the world’s Top 10 Smallest Tanks (Tankette) with Specifications, Length in feet, etc. let us learn a little bit more about them in detail.

The T-38 amphibious Scout tank was a Soviet amphibious light tank that Saw Service in World War II the tank served with the Red Army in the winter war with Finland in 1940 but was unsuccessful due to its light Armament and thin armor which was easily penetrated by rifle and light machine gun fire the Soviet Union built around 1,340 of these tanks between 1937 and 1939. the tank is about 12.4 feet long a mass of 4.1 U.S. tons making it the 10th smallest tank on the list.

In the Red Army, the T-37s were used to perform tasks in communication reconnaissance and as defense units on the March as well as active infantry support on the battlefield the tank was first created in 1932 based on the British Vickers Tankette and other operational amphibious tanks the t-37 was the first series of mass-produced fully amphibious tanks in the world about 1,200 of them were produced between 1933 and 1936. there were about 12.4 feet long and had a mass of 4 metric tons.

One of the weasel armored weapons carriers is a German light air-transportable armored fighting vehicle more specifically a lightly armored weapons carrier it is quite similar to historical scouting tankards in science Form and Function and it is the only true modern Tankard in use in Western Europe depending on the exact configuration the whistle 1’s length is about 11.8 feet and a mass between 2.75 to 4.78 metric tons the engine is a diesel engine giving a top speed of 70 kilometers per hour.

The l335 or cv35 was an Italian tankette that didn’t have a turret but its size weight and Firepower were more like modern tankards it was the most common Italian armored fighting vehicle and the Italians used it almost everywhere they fought in World War II however it wasn’t good enough for Modern Warfare because its armor was too thin and it had only machine guns for weapons it was so cheap to make but its light weapons and armors meant that it was used mostly for Colonial police reconnaissance and Supply work.

The CV l33 was a tank it originally built in 1933 and used by the Italian Army before and during World War II it was based on the imported British carton Lloyd Tankard license-built by Italy as cv29 many cv33s were retrofitted to meet the specifications of the cv35 in 1935. in 1938 the CV was renamed the l333 while the cv35 became the l335s the total mass of the tank was 2.7 tons and the length of 9.11 feet.

The Renault UE is a light-tracked armored carrier and prime mover produced by France between 1932 and 1940. it was produced on a large scale more than 5 000 of them in 1930 the French infantry decided to develop a light armored vehicle able to tow and Supply small cannons and mortars it was indeed a very small vehicle just 2.8 meters long and the roof was only one meter high its cargo carrying capacity was rather Limited.

This was a Czechoslovak design tank kit mainly used by Slovakia during World War II about 74 of them were built 40 Vehicles fell into German hands in 1939 after the occupation of Czechoslovakia the other 30 remained with the Slovak Army throughout the second world war and their is no record of their use its maximum speed was about 35 kilometer per hour the overall length is about 8.1 feet and the weight was about 2.7 metric tons.

The principal use of the t27 during its service life was as a reconnaissance vehicle used by the Red Army the t-27 saw active service in the Soviet republics of Central Asia during the 1930s however the fairly quickly became obsolete due to the introduction of more advanced tanks they lacked any communication devices as communication between Vehicles was intended to be carried out using signal flags about 2540 of them were built they have a length of 8.5 feet long and mass of almost 3 tons.

The TKS was polished tankards developed during the 1930s and used in the Second World War their small size suited them for reconnaissance and infantry support but with their light Armament of a single machine they stood no chance in combat against German tanks and suffered heavy losses during invasion of Poland about 575 of these were built there were about 2.7 tons heavy and had a total length of 8.46 feet.

1. Carden Loyd Best and Smallest Tank in the World (Tankette)

The Mark VI, the only version of the series of British tankers known as the Cardinals that saw significant production during the Second World War, was the most popular model and went on to influence many other tanker designs built in other nations. A total of 450 of these small tanks were built, and they measure about 8.1 feet in length and weigh 1.5 tons.