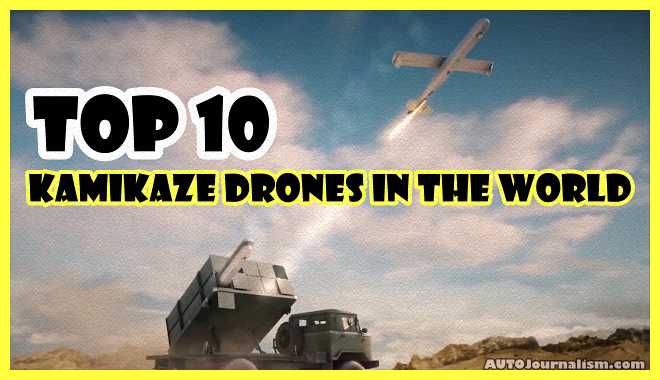 Top 10 kamikaze Drones in the World

Here is the list of Top 10 kamikaze Drones in the World, ⭐⭐⭐⭐⭐ KAMIKAZE DRONES Drones used by the military service a variety of objectives. Some conduct long-range reconnaissance while others carry out airstrikes on hostile locations. However, there is another unique type of drone that is used as loitering ammunition that falls exactly on the target and explodes. Today, we will show you the world’s ten most insane kamikaze drones.

Kalashnikov Concern, a Russian defense contractor named after one of the most famous small arms designers of all time and a supplier of infantry weapons to Russian ground forces, is now selling a drone that can carry a small explosive charge and dive onto its target, blowing itself and the target to smithereens. The Kalishnikov KUB-BLA drone is a kamikaze designed to avoid detection by regular air defense systems.

According to Kalashnikov, the KUB-BLA has a 3-kilogram 6.61-pound payload, a 30 minute flight time, and a top speed of 130 kilometers per hour (80 miles per hour). The payload is typically a high explosive charge. The KUB-BLA attacks targets after coordinates are fed into the vehicle, or it can attack a target based on an image uploaded to the control system.

The Israeli aerospace industry has unveiled the small harpy, a new tactical loitering munition. The munition hovers in the sky until a threat is discovered. When a threat is recognized, the system locks in on it and assaults it for a rapid lethal conclusion. The system was created to provide operators complete control up until the very last second, including the ability to stop an attack at any time. It weighs 100 pounds and 45 kilos.

According to the business, the weapon is electrically propelled, highly quiet, and carries a shaped charge weighing around 17 pounds 8 kilograms. It can be fired from land, sea, or air platforms and has a range of 62 miles 100 kilometers and a 120-minute endurance.

Wb electronics designed the WARMATE micro combat unmanned air system to help the armed services and special forces in close combat circumstances. When deployed in combat operations, the WARMATE loitering munition type can be flown semi-autonomously or manually by its operator from the ground control station. The air vehicle is integrated with replaceable payloads and is intended for both attack and reconnaissance missions.

In the loitering munition role, the WARMATE can fly at a maximum speed of 93 miles per hour (150 kilometers per hour) and can operate over a line of sight range of six miles ten kilometers. The micro drone is armed with an explosive ordnance fragmentation charge warhead and can also be equipped with a laser homing guidance head.

The HAROP is a loitering munitions system developed in Israel by Israel Aerospace Industries’ MBT missiles branch. The drone hovers above the battlefield, attacking targets by exploding into them. With an onboard explosive of 23 kilos 51 pounds, the HAROP can automatically seek for, detect, and attack enemy targets.

at long range, mobile or static targets It detects powerful pulses emitted by communication targets such as missile radars and collides with a propeller-driven source. HAROP has a range of 620 miles (1000 kilometers) and can maneuver for up to six hours in the air.

The SWITCHBLADE is a loitering munition created by Aerovironment. It is designed to act as a kamikaze, crashing into its target and destroying it with an explosive warhead. The switchblade system is tube launched, fully scalable, and man-portable. It can be remotely piloted or operated autonomously by a single operator, and it can wave off or recommit a target after launch. It is equipped with a video camera for real-time color and infrared video imagery, as well as a global positioning system for target acquisition.

The iai green dragon is an unmanned aerial vehicle with replaceable minds that can be used as a precision attack weapon against an unsuspecting enemy. The green dragon is a low-cost lingering munition system for infantrymen and special operations operatives at the tactical level.

It is small enough to fit in a sealed canister and can be deployed in minutes. The controller uses a tablet, and the air system communicates data from its electro-optical infrared camera in real-time. The camera is fully equipped to function in both day and night conditions, with a range of up to 24 miles (40 kilometers) and a 1.5-hour endurance.

COYOTE is a small disposable unmanned aircraft system developed by Raytheon and capable of operating in autonomous swarms. The COYOTE is launched from a Sona boy canister, with the wings unfolding early in the flight phase. It can withstand enormous accelerations during launch, which is a vital attribute for all tube launch applications.

In a series of 2016 demonstrations conducted on land and at sea, more than two dozen coyote systems successfully launched in a swarm and moved information demonstrating improved surveillance imagery, enhanced targeting capability, near real-time damage assessment, and a reduced threat to manned aircraft.

the efficiency of self-contained networking The drone’s top speed is 80 miles per hour (130 kilometers per hour), and it can fly for up to two hours.

The ROTEM L is an Israeli-developed tactical loitering munition based on a light multi-rotor platform that provides great capabilities against low-signature hostile weapons in difficult situations. With minimum planning and operational emphasis from the operator, the roadmap can undertake squad-level ISR and attack missions. The ROTEM L is a small sensor device that weighs about nine pounds 4.5 kilograms and has a large number of sensors.

The drone is a quadcopter with a maximum range of six miles that can loiter for 30 to 45 minutes. It can carry a one-kilogram warhead, which might be two fragmentation bombs. The airborne vehicle is recoverable and capable of fatal precision strikes on stationary and mobile targets.