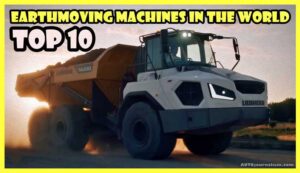 Top 10 Earthmoving Machines in the World

Here is the list of Top 10 Earthmoving Machines in the World, The ten most astonishing earth-moving machines in the world are massive powerful machines that can remove, push, or transport large amounts of soil that are used for land preparation and the execution of works such as the construction of roads or structures.

Infrastructure project investments have increased dramatically in recent years all around the world. China, for example, has made significant investments in the development and building of New Beijing International Airport.

Similarly, the Indian government has invested heavily in a number of infrastructure development projects, including industrial corridors, the Dedicated Freight Corridor (DFC), the Bharatmala Pariyojana, the Sagarmala Program, and the UDAN initiatives. A number of countries are also making large investments in sports infrastructure and facilities.

You can read all the Machine Names in One Image, just Zoom it

During the next five years, the demand for construction machines will be fueled by rising spending on capital-intensive projects and infrastructure development.

It is a compact track loader with a high lifting capability that was built to handle big loads such as mud or boulders in construction operations. It is 3.9 meters long by 2.1 meters broad and weighs 5.8 tons.

Its front blade is 2.1 meters wide, has a capacity of 0.6 cubic meters, and can be lifted to a height of 4.6 meters, and has a 100 horsepower engine with 380-newton meters of torque. It can attain a speed of 18 kilometers per hour. It has a gasoline tank capacity of 123 liters and a 1.7-ton load capacity.

It is a powerful high-performance backhoe loader made in Denmark that measures 7.1 meters in length and weighs 9.5 tons. It has a 145 horsepower engine with 597-newton meters of torque and can reach a top speed of 33 kilometers per hour.

Its front shovel is 2.5 meters wide, with a 1.7 cubic meter capacity, and can raise a 5-ton load. Its back bucket holds 0.43 cubic meters of material, has a reach of 6.2 meters and can dig to a maximum depth of 4.8 meters.

It’s a highly efficient articulated dump truck made in Germany that’s designed to carry dirt or rocks over the roughest terrain and has been thoroughly tested. It has a traction control system and provides maximum durability with minimal maintenance. It’s 10.4 meters long, 3.4 meters tall, and weighs 24.6 tons.

It has a 360 horsepower motor, 2500 newton meters of torque, and a top speed of 57 km/h. It is employed in large-scale projects and can carry loads of up to 28 tons or 18 cubic meters.

It is a German-made high-efficiency dirt compactor that is meant to work in huge civil engineering projects such as road or airport construction. It is 6.5 meters long by 2.4 meters broad and weighs 25.2 tons.

It has a 200 horsepower engine with 647-newton meters of torque. Its roller has a working width of 2.1 meters and a diameter of 1.7 meters. Its maximum centrifugal force is 330 kilonewtons, and it operates at a frequency of 26 hertz with an amplitude of 1 to 1.9 millimeters.

It is a powerful and capable scraper made in the United States that is used for excavating, transporting, or unloading items such as earth rocks or coal, as well as leveling land for the construction of highways or airports. It is 15.4 meters in length by 4 meters in width.

It can work at a depth of 53 cm and weight 54 tons. Its carrying box is 3.5 meters wide and has a maximum capacity of 38 cubic meters. It features a 570 horsepower engine and can attain a top speed of 55 kilometers per hour.

It is an Italian-made high-productivity bucket wheel trencher that is used to trench dirt or rocky soils in utility projects. It can dig long-distance trenches quickly and install big diameter plates or electrical wiring.

It is 14 meters long, 6 meters tall, and weighs 70 tons. It can dig trenches 3 meters deep and more than 1.6 meters wide, and it has a 540 horsepower engine that allows it to work at speeds of more than 3 kilometers per hour.

It is a productive and safe motor grader manufactured in the United States that is used to level various types of terrain in the construction of roads or structures. It is 16.7 meters in length and weighs 73.3 tons.

It features a 535 horsepower engine with a torque of 2200 meters and a top speed of 41 kilometers per hour. Its front blade is 7.3 meters broad with a drag force of 39 tons.

It is Komatsu’s largest bulldozer in production, and it is designed to combine the highest power and speed. It is used in construction or mining activities to move massive volumes of earth or rocks, and it measures 11.5 meters long by 4.6 meters wide and weighs 108 tons.

It features a 900 horsepower engine with 3800-newton meters of torque and a top speed of 11 kilometers per hour. It has a capacity of up to 34 cubic meters and measures 5.2 meters wide by 2.6 meters high.

It is a huge, high-productivity wheel loader manufactured in the United States. It is designed to deliver maximum performance while consuming the least amount of fuel. It allows you to move enormous amounts of soil or rocks in a short amount of time.

It’s a large-scale excavator made in Germany that measures 23.9 meters in length, 10.5 meters in breadth, and 11.7 meters in height.

It weighs 800 tons and has a maximum excavation depth of 9 meters. Its bucket holds 45 cubic meters of material and has a digging force of 1760 kilonewtons. It has two engines that produce a total of 4 000 horsepower and can reach a top speed of 2.6 kilometers per hour. Because of its size and capacity, it can load trucks and complete major projects rapidly.

Top 10 Dredgers in the World

Top 10 Offshore Boats in the World