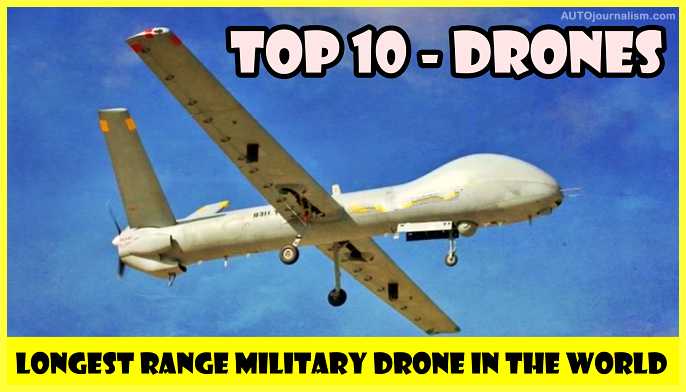 Here is the list of Top 10 Longest Range Military Drone in The World, The military use of drones has become the principal use in today’s world, utilized as target decoys for combat missions, research and development, and surveillance drones have been a part and parcel of the military forces globally, one criterion that is highly significant is endurance

Endurance is the maximum amount of time that an aircraft can spend in a cruising flight. It is a fundamental problem for designers of unmanned aerial vehicles, which play a critical role in a wide range of military and non-military missions. today we will list out the Top 10 Longest Range Military Drone in The World (UAVs)

List of Top 10 Longest Range Military Drone in The World

It is an unmanned reconnaissance aircraft built in Israel by the Mallet branch of Israel’s aerospace industries. It is powered by a single pred in Whitney Canada p2667a engine with a 1200 horsepower output.

It has a maximum range and height of seven thousand four hundred kilometers and fourteen thousand meters, respectively. Long endurance at a medium altitude UAVs can fly at heights higher than commercial aircraft, and they have the all-weather capability, autonomous takeoff and landing systems, and triple-redundant avionics. This drone has a battery life of more than 30 hours.

This is a high altitude remotely piloted surveillance UAV used by the United States Air Force. It is powered by a single Rolls-Royce f-137 doubler 100 turbofan engine with a thrust of 7 600 pounds. With this power, it has a maximum range of 22 780 kilometers and an altitude of 18 000 meters.

The global hawk is a high-altitude long-endurance platform capable of remaining aloft for more than 32 hours. Its tasks are comparable to those of the Lockheed u2. The rq4 provides a broad overview and system surveillance, as well as the capacity to span the spectrum of intelligence collection capability to support forces in global military operations.

This is a tactical Israeli medium-sized multi-payload medium altitude long endurance unmanned aerial vehicle. It is powered by a single Rotax 914 engine that generates 115 horsepower.

It can fly at a maximum height of 9100 meters and has a flight endurance of more than 36 hours. Payload choices include electro-optical or infrared sensors. Ground-moving target indication radar, communications and electronic intelligence, electronic warfare, and hyperspectral sensors are all examples of synthetic aperture radar. The Hermes 900 can carry a payload of 300 kilos.

It is manufactured by general atomics aeronautical systems and is primarily used by the US Air Force and the CIA The engine is a substantially modified Rotax 914 turbo engine with an output of 115 horsepower.

It has a service ceiling of 7 600 meters and a range of 1250 kilometers. The predator has a 40-hour endurance and is the world’s first armed unmanned aerial system capable of delivering precision to air surface weapons. It is the most battle-tested and unmanned aerial system in the world. This drone was originally designed for aerial reconnaissance and observational roles, but it was later modified and upgraded to carry and fire two AGM-114 Hellfire missiles or other munitions.

This is the next-generation sophisticated version of the battle-proven grey eagle unmanned aircraft system; it is driven by a high-performance 180 horsepower diesel engine and has a range of 8839.2 meters. The autonomous aircraft can fly for up to 42 hours.

The aircraft provides the army with superior UAS capability, including much higher endurance, improved dependability and maintainability, and dramatically expanded payload and weapon capacity. The internal cargo capacity of the Great Eagle Extended Range, combined with its enhanced engine power, provides expansion capability for a better airworthiness design.

It is capable of medium altitude long endurance missions lasting up to 52 hours at a height of 10,000 meters. It has exhibited 52 hours of continuous flight time, although the effective operational maximum flight time depends on cargo and flying profile.

which is the most recent UCAV in the rainbow series produced by the China Academy of Aerospace Aerodynamics, a subsidiary of the China Aerospace Science and Technology Corporation, with a range of 10,000 kilometers, a service ceiling of 9000 meters, and an endurance of 60 hours.

The Chinese officials claimed that the ch5 rainbow was similar in performance to the USMQ-9 reaper and that it could cost less than half as much. It can carry munitions of various types and, in both form and function, is similar to the American MQ-9 Reaper UCAV. Future blocks of ch5 will be able to stay in the air for up to 120 hours.

The Yaman smart I unmanned air system is a medium altitude long endurance unmanned aerial vehicle built and manufactured by Adcom systems in the United Arab Emirates. It is powered by a primary pressure propeller engine with a 115 horsepower output.

To satisfy the different mission objectives, the UAV can be loaded with a choice of payload sensors and signals intelligence systems. The smart eye UAV can stay airborne for 120 hours.

The UAV is powered by a hybrid turbine electric propulsion system that incorporates a four-stroke four-cylinder turbocharged liquid air-cooled Rotax 914 ul engine with an output power of 115 horsepower. The yam bun united 40 can fly for up to 120 hours or 5 days and can operate at a maximum altitude of 7000 meters.

Top 10 Trenchers in the World