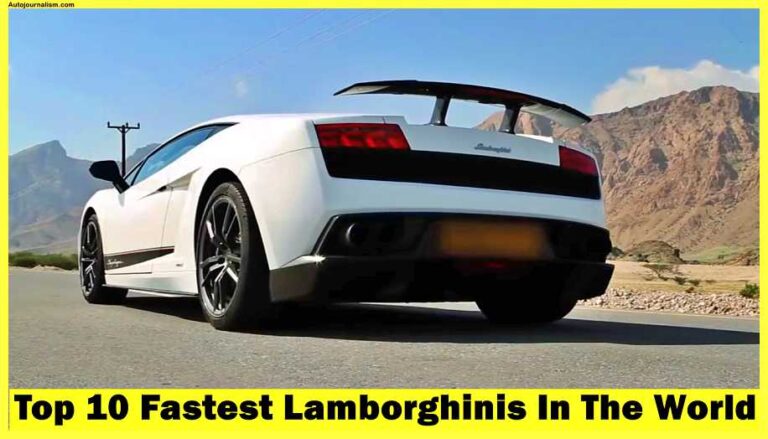 Top 10 Fastest Lamborghinis In The World

The table provides the list of the Top 10 Fastest Lamborghinis In The World in 2023-2024 along with their Specifications, Price, and Top Speed.

Now that you know the world’s Top 10 Fastest Lamborghinis In The World In 2023-2024 with Specifications, Prices, and Top Speed, let us learn a little bit more about them in detail.

The convertible variant of the Huracán was revealed at the Frankfurt Motor Show on 14 September 2015. The 5.2-liter naturally aspirated V10 engine is the same as the coupé and generates a massive power output of over 449 kW. This supercar can go from 0 to 100 km/h in 3.4 seconds, and it also has a top speed of 323 km/h. the Huracán is the 10th fastest Lambo ever built, the base price of this car starts at $241,000. The Lamborghini Huracán achieves a breathtaking performance. With its pure and absolute design, the supercar delivers an unparalleled sports car experience.

Lamborghini unveiled the Gallardo back in 2003, and it’s considered one of the best vehicles from the brand. They produced the Gallardo for around ten years and released a few different versions. Out of all, the LP 570-4 was the fastest. It was one of the last Gallardo’s produced and the car maker tuned the engine and provided a range of other improvements to make it faster. This Supercar features a 5.2-liter V12 engine that was able to produce 561 hp in total. The car has a top speed of 202 mph. On 25 November 2013, the last Gallardo was rolled off the production line. The Gallardo was replaced by the Huracán in 2014.

The Sesto Elemento is a high-performance limited edition supercar produced by the Italian car maker Lamborghini. With a price tag of $2.2 million, The Sesto Elemento debuted at the 2010 Paris Motor Show. With a top speed of 205 mph, it’s an extremely high-end Lambo that was produced in a limited release of just 20 units back in 2011. The Sesto Elemento uses the same 5.2-liter V10 that was seen in the Gallardo, but this time the engine produced 570 hp. However, the most important fact about this car is the materials used. It’s almost entirely made from carbon fiber and Lamborghini went to great lengths to reduce as much weight as possible.

The Lamborghini Diablo GT-R is a high-performance mid-engine sportscar that will go down in the history books as one of the greatest Lambos of all time. The car was initially released in 1990, but Lamborghini produced the car until 2001. The Diablo GT-R was a race version of the street-legal Diablo. The car used a 6.0-liter V12 engine that was extensively modified. Additionally, they removed things like the stereo and air conditioning to reduce its weight, allowing it to reach speeds of 210 mph. A true successor to the Diablo SVR, the GTR version of this car is limited to only 30 units, with the price starting at $350,000.

Another Diablo on the list, and this time it’s the SE30 Jota that managed to go just a little faster than the Diablo GT-R. The Diablo SE30 Jota was a special edition supercar and they only made about 28 of these cars when it was introduced back in 1995. With the price starting at $350,000, This car has a top speed of 211 mph, this super fast Lambo featured a heavily modified 5.7-liter V12 that managed to pump out 595 bhp in total. Ranked to be the 6th fastest Lambo ever made, the supercar was taken from the production line as a regular SE30 and was transformed into a Diablo SE30 Jota.

A successor to the Diablo, the Murciélago Superveloce is the 5th fastest Lambo of all time and was the brand’s first new design in eleven years. The original Murciélagos were released in 2001, and like most Lamborghinis, they made a few different versions over the course of nine years. The LP 670-4 Superveloce was one of the last ones made, and it was also the fastest version. Its 6.5-liter V12 offered 661 hp which allowed it to achieve speeds of 212 mph. Lamborghini demonstrates its exceptional skills in the sector of light construction and the use of advanced materials such as carbon fiber.

The Lamborghini Aventador is a mid-engine supercar produced in Italy. The Aventador LP 700-4 is one of the brand’s current offerings and is considerably faster and more expensive than the Hurácan. It’s rocking a 6.5-liter V12 that delivers 690 hp in total. With its aerodynamic design and all the newest advancements in automobile technology, it can top out at 217 mph. With the price starting at $795,000, production of the Aventador was planned to be limited to 4,000 vehicles, however, in 2016, it achieved the 5,000-unit milestone.

The Lamborghini Aventador SuperVeloce LP 750-4 was announced at the 2015 Geneva Motor Show. The car also features improved aerodynamics, with downforce increased by 180% as compared to the standard Aventador coupé. It uses the same engine as the standard LP 700-4, however, this time it delivers 740 hp. While its top speed hasn’t officially been recorded, Lamborghini says that it should achieve speeds of over 217 mph. This Aventador is an updated version of the previous model on our list. Lamborghini altered and fiddled with this version to make it not only lighter, but more powerful as well. Delivery of the car began in the second quarter of 2015, with production limited to 600 units and a base price of $750,000.

The Lamborghini Reventón is a mid-engine limited production sportscar that debuted in 2007. This limited-edition model was priced at $2 million when it was released, and they only made just 21 in total. The Reventón has a 6.5-Liter V12 under the hood, and it was recorded in Dubai to achieve speeds of 221 mph. According to the official press release, the Reventón’s exterior styling was inspired by the fastest airplanes. While the exterior is new, almost all the mechanical elements, including the engine, are sourced directly from the Murciélago. Ranked as the second fastest Lambo ever, the base price of this supercar starts at $1.3 Million.

The Lamborghini Veneno is a limited-production high-performance sportscar produced based on the Aventador to commemorate Lamborghini’s 50th anniversary back in 2013. The Veneno is the costliest Lambo ever built, between 2014 and 2015, the brand produced only 14 Venenos, with each costing roughly $4.5 million depending on the features chosen. The engine is a development of the Lamborghini Aventador’s 6.5-liter V12 engine and it generates 740 horsepower and 509 pound-feet of torque, allowing it to reach 60 miles per hour in just 2.9 seconds, making the Veneno the fastest Lambo of all time.