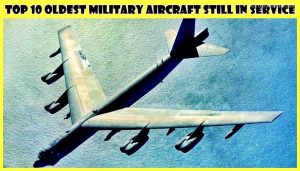 The Cessna t-41 is the tenth-oldest military aircraft currently in use in the United States. This is a military version of the popular Cessna 172, which was first used by the US Air Force and Army in 1964.

It had a larger engine and a variable pitch propeller installed. Many countries, including Angola, use the T-41. Argentina, Uruguay, Turkey, and a slew of other countries Some still exist today, though their numbers have decreased dramatically in recent decades.

The Northrop F5 is ranked ninth. The F5 is a supersonic fighter that has been in service since 1962. It is agile, maneuverable, and dependable. The f5 was created in answer to a request from the United States Navy in the 1950s for a small light jet-powered fighter that could operate from the decks of its escort carriers. More than 3800 f-5s and t-38 advanced trainer aircraft were built. The United States Navy and United States Marine Corps use the f5 and f versions as enemy trainers, with roughly 400 aircraft in service as of 2021.

The McDonnell Douglas f4 phantom 2 is the eighth-oldest US military aircraft still in service today. The US Navy first deployed this long-range supersonic interceptor aircraft in 1961, followed by the US Marine Corps and the US Air Force in the mid-1960s, with 5195 aircraft manufactured between 1958 and 1981.

The f4 phantom 2 is still in service with the air forces of Iran, South Korea, Greece, and Turkey 64 years after its first flight.

The Northrop t-38 talon is number seven on the list of the top ten oldest military aircraft in service in the United States today. This is a twin-engine supersonic high-altitude jet trainer that first flew in 1961. It was the world’s first and most widely produced supersonic trainer, and it has been in production since its launch.

The t-38 has been in service with its original operator, the United States Air Force, for nearly 50 years as of 2020, and has been used for advanced pilot training, allowing trainees to master supersonic skills, aerobatics, blind and instrument flying, and cross-country navigation.

The Boeing RC-135 is ranked sixth. Since 1961, the US Air Force has employed this four-engine reconnaissance aircraft. The air force is capable of conducting intelligence-gathering and reconnaissance operations. The RC-135 comes in a variety of configurations.

The RC-135w is the most recent model. The UK Ministry of Defense purchased three RC-135w rivet joint reconnaissance aircraft, as well as related ground gear, on March 19, 2010, to carry out signal intelligence operations for the Royal Air Force. The first delivery began in November 2013 and ended in June 2017. The plane was fully operational in February 2018.

The bell uh-1 is number five on the list of the top ten oldest military aircraft in service today in the United States. This is a military utility helicopter that was created by Bell to meet a 1952 US army request for a medical evacuation and utility helicopter. It entered service in 1959.

The uh-1 was the first turbine-powered helicopter manufactured for the US military, with over 16000 units produced since 1960. The uh-1 was initially used in combat during the Vietnam War when roughly 7,000 helicopters were deployed.

The Boeing kc-135 Strato tanker is the fourth-oldest US military aircraft still in service today. It is a military aerial refueling aircraft that entered service in 1957 and is still in use today. The kc-135 can also transport litter and ambulatory patients using patient support pallets during aeromedical evacuations.

It’s one of nine military fixed-wing aircraft that have been in continuous service with their original operator for more than 60 years, according to studies. Many of the planes could have flown until 2030, but maintenance costs have skyrocketed.

The Lockheed C-130 Hercules is ranked third. It started service with the United States in 1956 and is well recognized for its global support of tactical airlift, special operations, commercial missions, and refueling missions.

With its updated Lockheed Martin c-130j super Hercules currently in production, the c-130 became the fifth aircraft to celebrate 50 years of continuous service with its original principal client, the United States Air Force. For nearly 60 years, the C-130 Hercules has been in continuous production.

The Lockheed u-2 is the second-oldest US military aircraft still in existence today. During the Cold War, this high-altitude surveillance plane flew over the Soviet Union. china U-2 aircraft from Vietnam and Cuba have taken part in post-Cold War conflicts in Afghanistan and Iraq, as well as other multinational NATO missions.

The u-2s, the most recent model, received a technical update in 2012. It is one of just a few aircraft types to have served the US Air Force for more than 50 years.

The Boeing B-52 Stratofortress, which has been in service with the United States Air Force since 1955, is the oldest military aircraft still in use today. As of June 2019, the Davis Monthan AFB boneyard had 76 aircraft in stock, with 58 operated by active forces, 18 by reserve forces, and about 12 in long-term storage.

Due to their outstanding performance at high subsonic speeds and cheap operating costs, they are still in use today. In 2015, the B-52 achieved 60 years of continuous service with its original operator, and the last planes are anticipated to serve until the 2050s after being modified between 2013 and 2015.