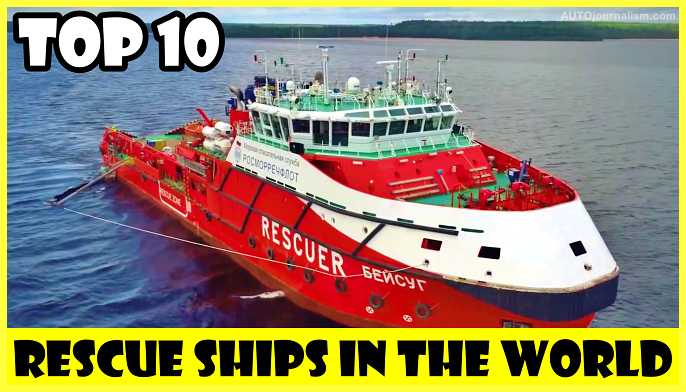 Top 10 Rescue Ships in the World

Here is the list of Top 10 Rescue Ships in the World, These are the ten most spectacular rescue ships in the world, which are utilized by emergency services all over the globe to carry out search and rescue missions in difficult conditions and keep coastal and offshore regions safe.d.

It is a swift rescue boat with high mobility that was made in Norway. It is designed to work with a big crew and may be utilized for rapid response missions and coastal rescue operations in extreme weather situations.

It can carry nine crew members in special chairs and is fitted with infrared cameras that allow you to instantly detect persons in the water. It is 9.5 meters long by 3 meters wide and weighs one ton. It has two engines totaling 700 horsepower and can reach a top speed of 45 knots (85 kilometers per hour).

It is a highly maneuverable multi-function rescue boat created in Norway that is meant to give exceptional performance and safety with a large operating range. It has been utilized by several Norwegian rescue agencies to safeguard coastal regions since 2016.

Its modular design allows it to be customized for various missions and it can also be equipped with personal watercraft. It measures 12 meters long by 4 meters wide and has a gross tonnage of 11 tons. It has two engines with a total of 1000 horsepower and can reach a maximum speed of more than 45 knots.

It is a multi-purpose high-powered rescue boat made in Finland. It is fitted with a strong water cannon and can also be used as a fireboat.

It also has medical equipment to transport the injured and is used as an ambulance boat. It can navigate in difficult conditions and has space for two crew and a total of ten passengers. It measures 13 meters long by 4 meters wide and has a displacement of 14 tons. It has two engines with a total of 1000 horsepower and can reach a top speed of 35 knots.

It is a heavy-duty lifeboat built in Canada that is part of the Canadian Coast Guard fleet. It can sail in gusts over 90 kilometers per hour and battle seas up to nine meters high.

It has a range of 200 nautical miles (370 kilometers) and can accommodate two crew members, two rescue professionals, and five passengers. It is 14 meters long and 4 meters broad, with a gross tonnage of 33 knots. It is powered by two engines totaling 900 horsepower and has a top speed of 25 knots.

It is a new generation quick response boat built in the Netherlands that is used by Dutch and Turkish rescue agencies to carry out operations in coastal regions.

The form of its aluminum hull lets it cut through the waves and boost stability even in harsh circumstances, and it is engineered to recover in seconds after a rollover or 360-degree spin. It is 19 meters long and 6 meters broad, with a range of 3 300 nautical miles and a top speed of more than 30 knots.

It is a search and rescue vessel that was built in Germany. It is utilized by the German society to rescue stranded people and preserve the North Sea safe.

It has a variety of equipment and is ready for immediate use 24 hours a day. It has space for 16 crew members and a range of seven days or 2 500 nautical miles. It measures 46 meters long by 10.6 meters wide and has a gross tonnage of 300 tons. It has three engines with a total of 9200 horsepower and can reach a speed of 25 knots.

It is a Russian-made multifunctional salvage vessel that is used by the Russian Ministry of Transport for rescue, evacuation, and medical support operations. It can also assist ships in trouble or tow abandoned ships.

It is a Russian icebreaker ship built in Finland that is used by the Russian navy’s emergency service to rescue huge tankers caught in the ice.

It is a multipurpose salvage ship built in Russia that is used by the maritime rescue service for rescue operations, help to damaged ships, or firefighting. It has enough gasoline, water, and food to last for more than 30 days and has a range of 4 000 nautical miles.