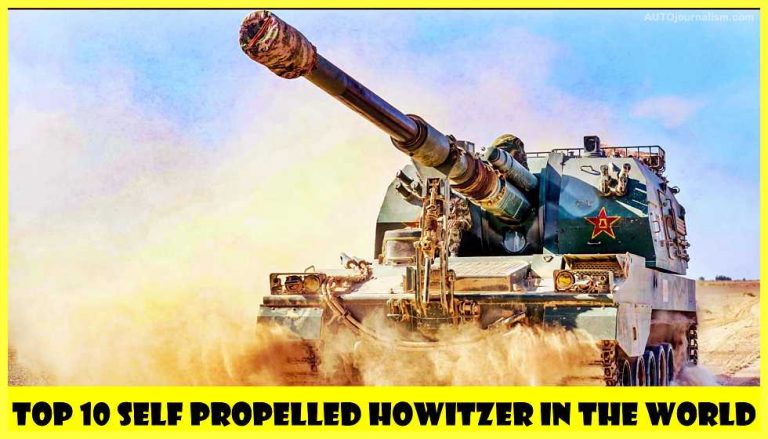 Top 10 Self Propelled Howitzer in the World

So, which is the world’s best self-propelled howitzer?

Which self-propelled howitzer is the most competent and effective?

List of Top 10 Self Propelled Howitzers in the World

The PzH 2000 is a German self-propelled howitzer. It is a highly sophisticated and powerful artillery weapon. The German army originally planned to buy 1 254 new self-propelled howitzers, but only 185 were ordered in 1996. In 1998, the German army received the first of these self-propelled howitzers. It’s also been sold in a few countries. The pzh2000 is equipped with a fully automatic loading system as well as an ammunition management system. It is compatible with standard NATO 155-millimeter ammunition and has a maximum range of fire of 30 kilometers with standard key frag projectiles and 40 kilometers with rocket-assisted projectiles. The highest rate of fire is nine rounds per minute.

This artillery system is capable of multiple round simultaneous impact MRSI fire, which means it can launch numerous rounds with varied trajectories that all hit on the target at the same time. The cannon is automatically placed using the firing control data once the PzH 2000 gets target data through a data link. This artillery system provides excellent defense. Its front armor can survive impacts from 14.5-millimeter bullets, and if necessary, explosive reactive armor may be added.

No.2 2S35 Koalytsiya-SV ( Self Propelled Howitzer )

The 2S35 Koalytsiya-SV is the most recent Russian artillery system. It was developed as a successor to the 2S19mstas. The first demonstration of this self-propelled howitzer was completed in it was unique and had two 152 millimeter guns, but for some reason, the twin-barrel design was abandoned in 2013. A new prototype of the Koalytsiya-SV was completed in it had a different design and only one gun the first Despite the fact that the colitsia sv resembles the earlier 2s19msta, it is now one of the most capable howitzers in the world.

It’s a completely unique system. It features an unmanned turret and is armed with 152mm ordnance. It uses a modular charge system and has a fully automated ammunition loading and handling system.

The coalition appears to be capable of multiple round simultaneous impact shooting since the maximum rate of fire is roughly eight shots per minute. This artillery system carries an outstanding onboard ammo supply of around 60 to 70 rounds. The Koalytsiya-SV features a high level of automation, with just a three-man crew operating the artillery system. At the back of the turret, this artillery system features a built-in ammunition reloading mechanism that facilitates the reloading of ammunition from resupply vehicles.

The plz 52 is a new Chinese self-propelled howitzer that is an enhanced version of the plz-05 that is presently in service by the Chinese army. The plz-05 is one of the world’s most capable artillery systems, but the plz-52 is primarily geared towards export clients rather than the Chinese army.

No.4 K9 Thunder ( Self Propelled Howitzer )

The K9 Thunder is a self-propelled howitzer from South Korea. In the late 1980s, the Republic of Korea army outlined its requirements for a new indigenous 155 millimeter tracked howitzer to meet 21st-century operational requirements. These included a higher rate of fire, longer range, improved accuracy, and faster into and out-of-action times. The canine thunder was developed starting in 1989 and went into service in 1999, replacing the previous k-55 self-propelled howitzer, which is a Korean variant of the American m109a2.

The army of the Republic of Korea uses the K9 in great numbers. The k9 thunder has an automated shell handling and ramming system and is compatible with normal NATO 155mm ammunition. The maximum range of fire is 30 kilometers with a regular thermal frag projectile and 40 kilometers with a rocket-assisted projectile. The canine thunder can shoot six rounds per minute and is capable of multiple round simultaneous impact firing. It can fire three rounds in 15 seconds, each in a different trajectory, such that all of the shells hit the target at the same time.

This artillery system has 48 rounds for the main cannon and is equipped with an automatic fire control system, internal navigation, and automatic gun placement systems. The artillery system is supplemented by a specialized k-10 ammo resupply vehicle, which is likewise built on the k9 chassis. It takes 30 seconds to prepare to fire at emplacement and 60 seconds from mobility. The reloading procedure is entirely automated, allowing the crew to work without being exposed to enemy fire or in hazardous regions. The t-155 for Tina is a Turkish 155mm self-propelled howitzer that employs k-9 subsystems. It is now in use by the Turkish Armed Forces.

Type 99 is a Japanese self-propelled howitzer developed by Mitsubishi Heavy Industries and Japan Steelworks. A small number of type 99 self-propelled howitzers are currently in service with the Japanese ground self-defense force. Previously, Japanese laws prohibited the export of weapons and military equipment. With a conventional heat frag projectile, the greatest range of firing is 30 kilometers, and with a rocket-assisted projectile, it’s roughly 38 kilometers. The maximum rate of fire is around six rounds per minute.

The PLZ-05, also known as the type 05, is a recent Chinese development that evolved from the plz-45 and was developed as a successor to the type 83 SPH. This millimeter self-propelled howitzer has an automatic ammunition loading system that some sources claim was copied from the Russian to the s19 MSTA-S. The plz-05 uses Chinese 155mm ammunition and has a maximum range of nearly 40 kilometers when using a rocket-assisted projectile. It can also fire laser-guided projectiles that are based on Russian krasnopal technology, as well as a GPS-guided projectile with a stated range of 100 kilometers.

However, the maximum rate of fire is unknown, although it is estimated to be approximately 8 to 10 shots per minute. The onboard ammunition supply is estimated to be around 30 rounds. This self-propelled howitzer is accompanied by an ammo replenishment vehicle that transports ammunition beneath armor on the battlefield. The resupply vehicle has a capacity of 90 rounds and can distribute ammunition automatically. This support vehicle is equipped with a crane for ammunition handling, as well as the ability to change the power pack and do other load handling tasks.

The M109A7 Paladin is an upgraded version of the widely used M109 self-propelled howitzer, which was first launched in the early 1960s and was formerly known as the M109 a6 PIM. The m109a7 artillery system was cleared for manufacturing in 2013, and the first of these artillery systems will be delivered to the US army in 2015. The modified M109 a7 contains a new automated loader and certain components from the aborted Crusader, as well as a Los c missile with a maximum range of 24 kilometers with a regular projectile and 30 kilometers with rocket support.

The m109 a7 can also fire m982 Excalibur extended-range precision-guided projectiles with a maximum range of 40 kilometers, but its maximum rate of fire is only four rounds per minute. This limitation is due to the design of the self-propelled howitzer, which dates back to the late 1950s. The paladin has a quick reaction time, stopping and firing the first round in under 60 seconds.

Each m109 a7 paladin is accompanied by an ammo supply vehicle, which is built on the same chassis as the paladin and carries spare ammunition beneath armor. The US Army intends to acquire a fleet of 580 m109 a7 howitzers, as well as a similar number of armor ammunition support vehicles.

No.8 Krab ( Self Propelled Howitzer )

Bae Systems Land Systems produced the Krab self-propelled howitzer. The Krab’s turret is nearly identical to the one on the AS-90 Braveheart. This artillery system is based on a modified chassis of the Polish PT 9120 main battle tank. The Krab was chosen by the Polish army after winning an international competition. The first of these howitzers were delivered to the Polish army in 2012. However, due to a number of issues, the future of this artillery system is doubtful. The Krab is equipped with millimeter l52 howitzers that can fire any NATO 155 millimeter ammunition.

The Krab is equipped with a Polish fire control system, intercoms, and radios. Its maximum range of fire is 30 kilometers with normal thermal frag projectiles and 40 kilometers with rocket-assisted projectiles. It carries a total of 60 rounds. Danish muzzle reference devices, which track departing bullets and modify the next firing, are added to the vehicle. The Krab is built on a modified chassis of the PT91 20 main battle tank, however, the manufacture of the engine for this chassis has been discontinued since 2012.

The AS90 is a Vickers-developed British self-propelled howitzer that entered service with the British army in 1993. In 1995, production came to an end. The British army received 179 as90 self-propelled howitzers, which replaced the fv433 Abbott and the usm-109. The AS90 is equipped with a 155mm L39 howitzer with an automated loading system and is capable of firing any standard NATO 155mm ammunition. The maximum range of fire is 24.7 kilometers with a normal thermal frag projectile and 32 kilometers with a rocket-aided projectile.

The AS90 can fire three rounds in ten seconds, with a maximum rate of six shots per minute and a sustained rate of two rounds per minute. There are 48 rounds in all. The British As90 is accompanied by an 8×8 high mobility logistics support vehicle with load handling equipment that transports ammunition. The As90 Braveheart was an improvement program for the As90, featuring a longer 155 l52 cannon and increased range of fire. This project was canceled.

However, Bae Systems developed a Krab artillery system that was mounted on a modified PT-91 40 main battle tank chassis and attached to the as-90 braveheart turret. This artillery system was designed to satisfy the needs of the Polish army. It was finally adopted, and delivery began in 2012. The Polish army required 80 howitzers of this sort, but the entire program was beset by complications.

The maximum range of fire for kraft’s noble precision-guided munitions is 24.7 kilometers with a basic defrag projectile and 28.9 kilometers with a rocket-assisted projectile. The Krasnopol projectile has a maximum range of 20 to 25 kilometers and a 70 to 90% strike probability depending on the variant. It can also engage moving vehicles. A total of 50 rounds are carried within the MSTA-s, with a maximum rate of fire of 7 to 8 rounds per minute. Although this artillery system lacks a specialized reloading truck, there is a secondary conveyor at the rear of the turret that allows ground ammo to be loaded. The 2s19m2 is a more current updated variant that the Russian army deployed in 2013.