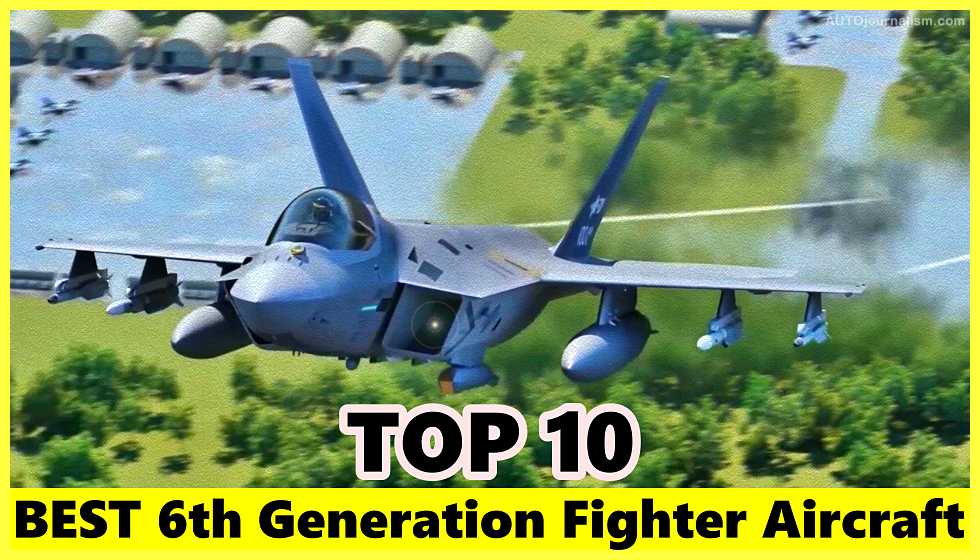 Here is the list of Top 10 6th Generation Fighter Aircraft, A sixth-generation fighter is a concept for a new kind of jet fighter that is more advanced than the current fifth-generation fighter in service and development. Japan, the US, the UK, France, Italy, Sweden, Germany, Spain, Russia, and China have all announced the development of a sixth-generation aircraft program. The initial focus on this 6th generation air superiority role shifted away from close-in dogfighting, which is becoming less prevalent, to ground support, cyber warfare, and even space warfare capabilities, with BVR air-to-air missile capability remaining significant.

Typical design characteristics anticipated to deliver these roles include:

The f-80x is a development and acquisition program for a potential 6th generation air superiority fighter to supplement and eventually replace the US Navy’s fa-18 ef super hornet. Next-generation technology such as maximal sensor connectivity and electronically programmed smart skins might be studied. Its illustrations and designs depicted a stealthy two-seat twin-engine tailless jet with a blended wing-fuselage and a tandem cockpit. It also featured canners, which are often used to make up the frontal radar cross-section.

The fa-entire x’s payload capacity, as well as the range and diversity of armament and equipment, will at least meet or perhaps exceed the existing platform’s payload capacity and capabilities, which is the super hornet. The aircraft must be able to operate from naval aircraft carriers of the Nimitz and Gerald R for classes.

It is the F/X penetrating counter-air designed for the United States Air Force, and it includes prototyping technologies to improve the aircraft’s speed and capability. Furthermore, it has been reported that the US 6th generation fighter jet will be both manned and unmanned, and will be equipped with artificial intelligence.

The next-generation air dominance or NGAD or fx program is a sixth-generation fighter developed by the United States Air Force with the goal of developing a family of systems to eventually replace the Lockheed Martin f-22 raptor. The NGAD or penetrating counterair will have a greater range, larger payloads, and the ability to carry hypersonic missiles. The US Air Force Research Laboratory unveiled a rendering of the fx fighter in March 2018, indicating that it will have a sleek stealthy design with a high-energy laser capable of halving enemy aircraft. The program, which aims to improve air supremacy, could see the fx fighters deliver significantly improved stealth capabilities and collaborate with unmanned vehicles.

Because of the aircraft’s ability to communicate data with different systems, the BAE systems tempest is a proposed fighter aircraft concept that is under development in the United Kingdom for the British Royal Air Force and the Italian Air Force. Armed forces will have a full view of the future battlespace. Swarming technologies will be used to operate the drones, and the cooperative engagement capability will allow the platforms to work together during an attack or defensive missions. tempest will employ a cutting-edge radar system known as a multi-function radio frequency system, which will be capable of transmitting over 10,000 times more data than present systems. It will also provide you with a considerable edge in combat by allowing you to find and target opposing platforms ahead of time.

The Mikoyan MiG-41 is a Russian aircraft that is intended to replace the Mikoyan MiG-31 in the Russian air force. It is currently in development and is expected to enter service by 2025. Russia has declared that this will be their sixth-generation aircraft with increased range and capabilities.

If all goes according to plan, Russia will have the most advanced interceptor and technically sophisticated aircraft in the world by the 2030s.

It is the Future Combat Air System, a sixth-generation aircraft proposed by France, Germany, and Spain. It is being developed by Airbus Sales Group Indra Systemes and Dassault Aviation and will be available in 2035 or 2040. It is equipped with new generation tools. It will take the place of France’s Rafales, Germany’s Typhoons, and Spain’s F-18 Hornets.

The future combat air system, or FCAS, is a European combat system of the system being developed by Airbus, Telus Group, Indra Sistemas, and Assault Aviation for use in future operational battlespaces. The FCAS will contain a next-generation armament system as well as additional air assets. In France, Germany, and Spain, the sixth-generation jet fighter will replace existing Rafales typhoons and ef-18 hornets. The FCAS is being built in two parts. distant carriers and next-generation fighters (NGF) According to Airbus, the NGF will establish the next level of survivability in terms of passive and active stealth. Because of the aircraft’s powerful avionics and sensor set, pilots and commanders will have unrivaled situational awareness.

China’s new 6th generation aircraft will be multi-tasking and capable of combating nuclear threats. It features an incredible avionic system and sensors that can identify an enemy missile and is powerful enough to melt a nuclear missile from a great distance.

At high altitudes and speeds, the j28, China’s sixth-generation stealth fighter, can achieve full frequency stealth. the more complex aerodynamic structure China’s 6th generation fire dragon multirole fighter has an upgraded control system and much improved airborne radar capabilities that can attack ground targets. The j28 laser weapon will be powerful, and capable of destroying nuclear missiles launched from any location. The j-28 also has a strong stealth fighter, making it difficult to detect. The aircraft also has exceptional maneuverability, known as the Pukuchev cobra maneuver, which significantly increases the aircraft’s ability to use airborne weapons, defeat opposing fighter attacks, and escape from its weapon killing zone.

The Mitsubishi F-X – I3 fighter was suggested by Japan in 2010 and is based on the third eye idea of an aircraft. It is made up of high-powered radar upgraded sensors and will be able to function as unmanned aerial vehicles (UAVs).

The i3 fighter was the name given to the concept fighter in development for the Japanese air self-defense force. By the mid-2030s, it will have succeeded the Mitsubishi f-2 as Japan’s first domestically-made stealth fighter jet. Advanced radar systems to counter other fighter stealth technology receiving targeting information from other platforms use of flyby optics to process information faster stealth technology gallium nitride semiconductors to improve radar performance and new more powerful fighter engines are some of the technology and capabilities the concept fighter is expected to have.

Taiwan advanced defensive fighter (Taiwan), Taiwan has begun construction of a six-generation fighter aircraft to compete with its adversaries when necessary. This aircraft will be constructed and developed by the Taichung-based aerospace industrial development organization. It’s an all-weather multitasker that has avionics and armament control systems in one or two seats.