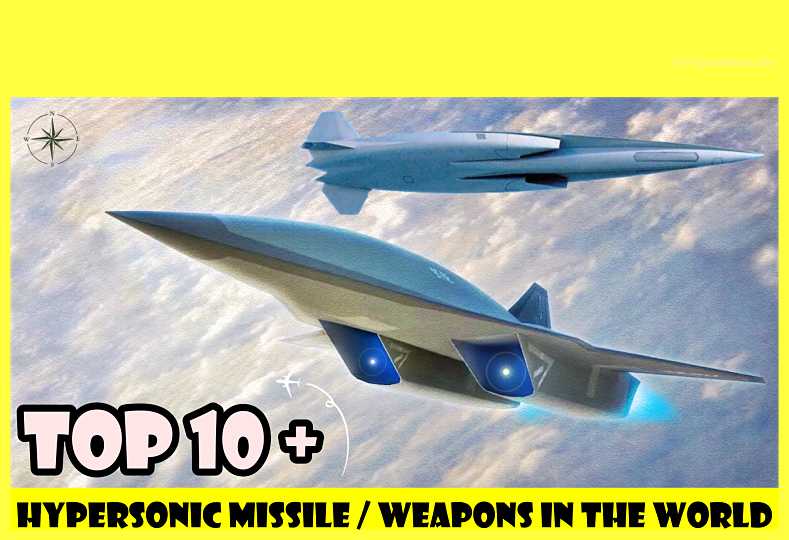 The Lockheed Martin SR-72 BLACKBIRD is the last but not least. With the advancement of anti-satellite missiles, anti-access area denial techniques, and counter-stealth technology, This high-speed aircraft was thought to be capable of breaching protective airspace and observing or hitting a target. Lockheed Martin privately presented this hypersonic UAV design for intelligence surveillance and reconnaissance in 2013 as a replacement for the defunct Lockheed sr-71 blackbird.

Next up is zircon. Russia is actively testing the zircon missile, a scramjet-powered maneuverable anti-ship hypersonic cruise missile. Zircon is thought to be a maneuverable winged hypersonic cruise missile with a lift-generating central body capable of Mach 8 to Mach 9 speeds. According to some reports, such high speeds would certainly create a cloud of plasma around the missile, which would absorb any radio waves and render the missile undetectable to radars. According to Russian news outlets,, the missile’s maximum range is 540 nautical miles, and a new fuel was developed for this purpose.

The Boeing x-51 wave rider is an unmanned research scramjet experimental aircraft for hypersonic flight and Mach 5 at an altitude of 21 000 meters. Wave rider refers to aircraft that use compression lift produced by their own shockwaves in general. The x-51 program was a collaborative effort between the US Air Force, NASA, Boeing, and Whitney Rocketdyne. The x-51 technology is being suggested for use in the Mark 5 Plus missile, a high-speed strike weapon that might reach service in the mid-2020s.

The Brahmos ii is a hypersonic cruise missile that is currently being developed jointly by Russia’s NPO national stroyania and India’s defense research and development organization, which has formed Brahmos aerospace private limited. It is the second of the Brahmos series of cruise missiles, and the Brahmos 2 is expected to have a range of 450 kilometers and a speed of Mach 7.

The AGM-183 ARRW is up next. This is a hypersonic weapon developed by Lockheed Martin for use by the United States Air Force. The missile has a stated maximum speed of mark 20. It’s been speculated that it’s the super-duper missile mentioned by US President Donald Trump during a press conference in May 2020. The weapon employs a boost-glide technology, in which it is launched to hypersonic speeds by a rocket before gliding towards a target.

The SHAURYA MISSILE is a hypersonic surface-to-surface tactical missile with a canister launcher developed by India’s defense research and development department for deployment by the Indian military. After three successful tests, it has a range of 700 to 1900 kilometers and can carry a payload of 200 kilograms to one ton conventional or nuclear bomb, providing it the potential to attack at a very long range against any foe.

The deep strike missile is a next-generation long-range surface-to-surface precision strike missile being developed by Raytheon for the United States Army. The deep strike prsm will deliver improved capabilities to attack neutralize suppress and destroy targets at depth on the battlefield. It is primarily intended to attack stationary ground targets such as helicopter staging areas and hardened bunkers.

The HSTDV MISSILE is a hypersonic scramjet demonstration aircraft that is unmanned. It’s being built as a missile carrier for hypersonic and long-range cruise missiles, but it’ll also be used for civilian purposes, such as low-cost satellite launches. The defense research and development organization is in charge of the HSTDV program, which aims to reach Mach 6 at a height of 32.5 kilometers.

The ASN 4g is a nuclear-armed hypersonic cruise missile that will eventually replace the ASMPA missile. The Aryan Group is developing the ASN 4g, which is expected to be operational by 2021. The goal is to develop a missile that can travel at hypersonic speeds of Mach 7 to 8. The ASN4g might be mounted to the Rafale fighter plane, and a missile range of more than 1000 kilometers is required.

The 14x is a Brazilian hypersonic light vehicle being developed by the Institute for Advanced Studies’ Aerothermal Dynamics and Hypersonics and the Brazilian Air Force. It is equipped with a liquid hydrogen-fueled scramjet engine that is propelled by a vsp30 rocket to a height of 100,000 feet and a top speed of Mach 10. Brazil sees the technology as one of the most cost-effective ways to access space in the near future, and it may be used to launch satellites into orbit and make certain orbital excursions. It can be used in a variety of sectors, including the development of intercontinental ballistic missiles and civil aircraft.

The Perseus missile, a stealth hypersonic cruise missile concept research being conducted by MBDA, is up next. This weapon’s unique feature allows a single Perseus to attack multiple targets in the same broad region or a single huge target in numerous distinct areas at the same time, maximizing damage. With a range of 300 kilometers and speeds of Mach 5, the stealthy persistent missile idea is expected to have characteristics similar to Brahmos.

First, there’s the DF-ZF. The DFZ-f is a Chinese hypersonic light vehicle meant to be installed atop a df-17, a type of ballistic missile built exclusively to transport HGVs. The dfz-f is expected to reach speeds of Mach 5 to Mach 10 and could be used to deliver nuclear weapons as well as precision strike conventional missions that could penetrate the layered air defenses of a US carrier strike group. Hypersonic lighter vehicles are less susceptible to anti-ballistic missile countermeasures than conventional re-entry vehicles.

Many people are unaware that Brazil has the capability to create nuclear weapons. Because western countries know that if Brazil can provide it, the Amazon Rainforest will not be internationalized. According to ALNL studies, Brazil is capable. Los Alamos National Laboratory (commonly abbreviated as Los Alamos or LANL) is a national laboratory of the United States Department of Energy that was founded during World War II to develop nuclear weapons as part of the Manhattan Project.