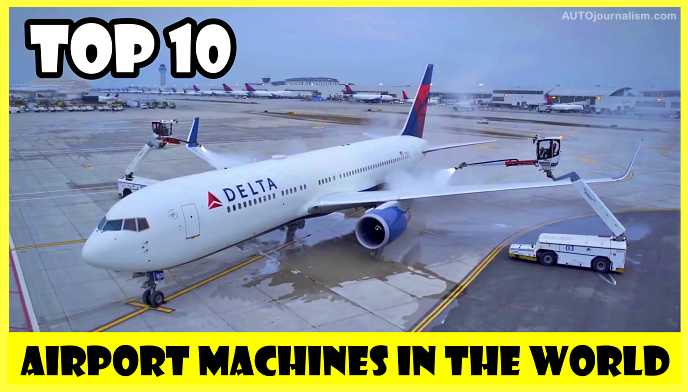 Top 10 Airport Machines in the World

Here is the list of Top 10 Airport Machines in the World, These are the ten most astonishing airport machines in the world. They are outstanding equipment of various sorts that are used in airports across the globe for the transportation of luggage, aircraft repair, runway maintenance, or cleaning of huge commercial airplanes.

It is a high loader made in Germany that is used to lift enormous items and place them in large airplanes. It is 13 meters in length by 4.5 meters in width and has a scissor lift that can load and unload heavy products up to a height of 5.6 meters.

It features a diesel engine with 138 horsepower, a top speed of 13 kilometers per hour, a lifting capacity of 35 tons, and a turning radius of 14 meters. It has six hydraulic outriggers and is the greatest capacity loader of its kind in the world.

It is a small tow tractor made in Germany that is used to move big items such as baggage or commodities from planes to airport storage. It is 3.2 meters long and 1.4 meters wide, with a top speed of 30 kilometers per hour.

It has a 100-horsepower electric motor with a torque of 320 Newton meters. It weighs 8 tons and can tow cargo weighing up to 80 tons, which are conveyed in many wagons. This truck may also be used to transport planes from the runway to airport hangars.

It is a belt loader made in the United States that is used to swiftly load and unload passenger luggage on planes. The vehicle is 7.6 meters long by 2 meters broad and weighs 3 tons.

Its mechanical conveyor belt is more than 80 meters long and 60 centimeters wide; it has a 114 horsepower engine and a load capacity of 900 kilograms; it has an emergency braking system and can travel at a speed of 15 kilometers per hour,

It is a twin boarding bridge created in Japan that can be converted to a wide range of aircraft. It is composed of steel and glass and is intended to give improved safety and comfort for passengers.

It allows passengers to rapidly board the plane, and because there are no steps, people in wheelchairs may readily board. It includes a control cabin that only requires one person to operate it, and it has an automatic docking system using artificial intelligence technology that is being utilized in boarding bridges for the first time in the world.

It is high-performance sweeping equipment made in Germany that is used to clear runways and remove metal debris that might cause harm.

It is a high-capacity snowplow made in Norway that is meant to swiftly clear snow off the runway and reduces interruptions to commercial flights. It is 12.7 meters long, 6.1 meters wide, and weighs 14.2 tons.

It features a 435-horsepower engine and a torque of 2100 newton meters. It has a snow removal blade and a steel and polyester roller that cleans the runway. It has a working width of 5.5 meters and a top speed of 65 kilometers per hour when removing snow off the track.

It is a tiny de-icer truck made in the United States that is used to remove ice forms off the surface of airplanes and requires just one operator.

It can be used on airplanes of all sizes, including the Airbus A380. It is 8.2 meters long by 3.2 meters broad and weighs 18 tons. Its telescopic arm can extend to 8 meters in length and its sprayer can reach a height of 20 meters. Its spraying mechanism employs a novel generation mixture, which minimizes fluid consumption while increasing production.

It is a revolutionary automatic airplane cleaning system created in Norway that can defrost and wash a big aircraft in less than 30 minutes. It uses an electric tug to steer the aircraft through the process and several jets of water under pressure containing de-icing solutions to remove ice and grime.

This device may drastically decrease operating costs and time while collecting up to 95 percent of extra liquid. It also performs a general check and administers anti-freeze liquid, preparing the aircraft for takeoff.

It has a range of 100 meters, can release 10,000 liters of water per minute, has a 1450 horsepower motor, and can travel at a speed of 135 kilometers per hour. It can move on all sorts of terrain, including sand and snow, and is now employed to keep airports throughout the world safe.

It is a high-powered semi-robotic tow tractor made in Israel that is used to pull planes from the gate to the runway. It can be utilized when an aircraft lacks maneuverability or to minimize aircraft fuel consumption.

It has an 800 horsepower hybrid engine and can achieve a speed of 42 kilometers per hour. It weighs 27 tons and can pull huge aircraft. It allows for all types of maneuvers and the plane is controlled by the pilot while being towed.