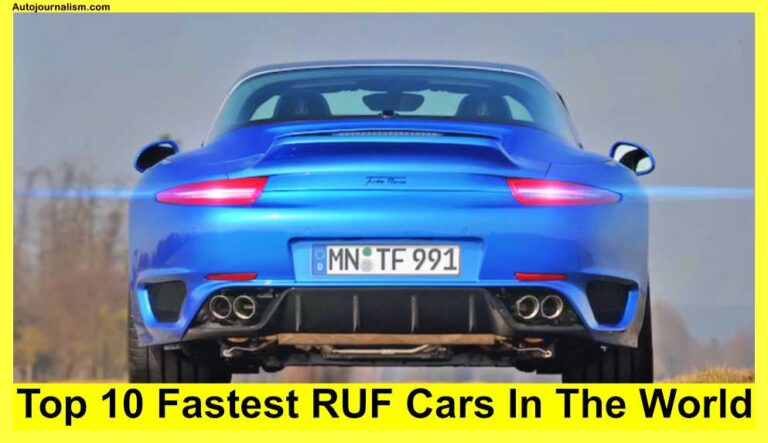 Here is the list of the Top 10 Fastest RUF Cars In The World, Ruf Automobile GmbH is a German car manufacturer that specializes in developing and building high-performance versions of Porsche vehicles. The company was founded by Alois Ruf Jr. in 1939 and is headquartered in Pfaffenhausen, Germany. Ruf is known for producing a variety of modified Porsche models, including the CTR (“Yellowbird”), CTR2, CTR3, and RT12. These vehicles are often characterized by their high power output and unique styling. In addition to producing its own vehicles, Ruf also offers various modifications and upgrades for Porsche models.

List of Top 10 Fastest RUF Cars In The World

RUF SCR was unveiled at the 2018 Geneva motor show the SCR is an important vehicle for the brand as it does not use Porsche’s platform but uses the company’s own carbon fiber monocoque chassis the SCR uses a 4-liter naturally aspirated Flat 6 engine that makes 510 horsepower and 347 pound-feet of torque Powers transmitted to the rear wheels through a six-speed manual gearbox it weighs 2756 pounds and the coupe can reach a top speed of 199 miles per hour about 15 SCRs are produced yearly with a hefty price tag of 650 000 Euros three times more than a new Porsche 911 Turbo S.

The RUF TURBO FLORIO was unveiled at the 2015 Geneva Motor Show it’s based on the Porsche 991 Targa 4 platform RUF adds its own touches to the body for aerodynamics and styling without ruining the looks behind the rear wheels since a RUF-built turbocharged Flat 6 engine outputting 636 horsepower and 616 pound-feet of torque to either a 7-speed PDK dual-clutch or six-speed manual transmission the open top can go 0 to 62 miles per hour in just 3.2 seconds and has a top speed of 205 miles per hour.

The RUF Turbo R was first introduced in 1998 to replace the ctr2 it’s based on the 993 generation Porsche 911 Turbo at that time it was produced in extremely limited quantities for only one year in 2016 RUF launched a turbo R limited to pay tribute to this 1998 Turbo R and it was one of their rarest cars with only seven produced with a starting price of around six hundred thousand dollars then the car still uses the 3.6 liter twin-turbocharged Flat 6 engine but Power has been increased to 620 horsepower and 553 pound-feet of torque the top speed of this version reaches 212 miles per hour.

Introduced in 1987 the RUF CTR also known as the yellow bird is perhaps RUF’s most famous car it’s based on the 1987 Porsche 911 Carrera 3.2 modifications by RUF make the vehicle 441 pounds lighter than the original stock 3.2 liter Flat 6 engine was upgraded to 3.4 liter with the addition of a custom twin turbocharger with twin intercoolers and installed Bosch fuel injection as a result Powers increased to 469 horsepower and 408 pound-feet of torque enough to Sprint to 60 miles per hour in just 3.65 seconds and has a top speed of 213 miles per hour making it the fastest car in the world at the time.

The RUF RTR was introduced in 2013 on the occasion of the 40th anniversary of the RUF turbo about 10 RTRs were built between 2013 and 2017. it uses a 3.8 liter twin-turbocharged Flat 6 engine and comes in two variants the first variant is based on the Porsche 991 turbo and Turbo S making 636 horsepower the second variant is based on the 997 and produces 791 horsepower with 730 pound-feet of torque and is mated to a six-speed manual gearbox it can reach 60 miles per hour from a standstill in just 3.1 seconds before reaching a top speed of 218 miles per hour the RTR is available in both narrow body and wide body configurations.

The CTR anniversary was unveiled at the 2017 Geneva Motor Show to honor the 30th anniversary of the first CTR’s appearance it boasts bespoke chassis developed in-house by RUF it’s powered by a twin-turbo 3.6 liter Flat 6 engine that makes 700 horsepower and 649 pound-feet of torque power sent to the rear wheels through a seven-speed manual gearbox and locking differential the coupe can go 0 to 62 miles per hour and under 3.5 seconds and has a top speed of 224 miles per hour the lightweight material keeps the total weight to just 2646 pounds only 30 units were produced and the price of each is 793 thousand dollars.

RUF introduced the RT-12 at the 2004 Essen Motor Show and it was based on Porsche’s then-latest 997 platforms the 3.8 liters twin-turbocharged Flat 6 engine produces between 530 and 650 horsepower in the S variant engine makes 776 horsepower and 649 pound-feet of torque Powers pushed to 720 horsepower and 693 pound-feet of torque for the r variant its top speed is rated to exceed 224 miles per hour a total of 13 rt12s were built.

The RUF CTR3 was introduced in 2007 to honor the 20th anniversary of the first CTR and it’s also the successor to the ctr2 it shares body styling and engine with the Porsche 987 Cayman and Porsche 997.1 Turbo for the first time however it features a RUF designed Bodywork RUF equipped the ctr-3 with a 3.7 liter twin-turbocharged Flat 6 engine making 691 horsepower and 656 pound-feet of torque enough to Sprint to 60 miles per hour in just 3.2 seconds and has a top speed of 233 miles per hour foreign.

The RUF ctr3 Club sport was introduced at the 2012 Geneva Motor Show to replace the ctr-3 it shares many features with the Lykan hyper sport it’s powered by a 3.8-liter bi-turbo Flat 6 engine that produces 766 horsepower and 723 pound-feet of torque power is sent to the rear wheels through a six-speed sequential manual transmission or 7-speed PDK the club’s sport accelerates from zero to 60 miles per hour in just three seconds and powers on to reach a top speed of 236 miles per hour making it RUF automobile’s fastest car only seven club sports were built with a starting price of over seven hundred thousand dollars.