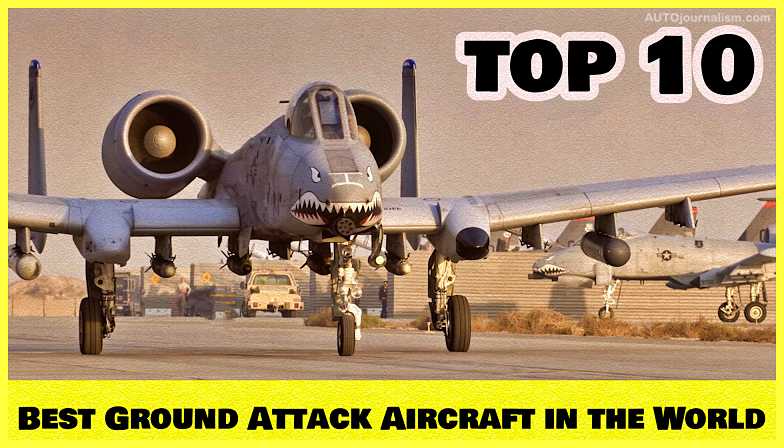 Here is the list of Top 10 Ground Attack Aircraft in the World, Ground-attack aircraft are designed to provide direct aviation support to ground forces on the battlefield using missile cannons, bombs, cluster weapons, or other ammunition. Because these planes are expensive, only a few countries use them. Today, we’ll show you the Top 10 Most Expensive Ground Attack Aircraft in the World.

List of Top 10 Ground Attack Aircraft in the World

In the late 1960s, the ALPHA JET was developed to answer a joint French-German request for both a jet trainer and a light assault aircraft. the most common users of this type of plane The alpha jets of Germany and France were used in diverse capacities. Nearly 5000 pounds of ammunition and equipment can be carried on a total of five hardpoints on the former as a ground-attack platform and the latter as a trainer aircraft.

In an armed variant, a gun pod carrying a 30-millimeter death cannon or 27-millimeter Mauser bk-27 cannon would likely be mounted onto the centreline hardpoint. The cost of one alpha jet aircraft is 4.5 million dollars.

The Casa C-101 AVIOJET is a low-wing single engine jet-powered advanced trainer and ground assault aircraft that was designed and constructed in Spain. Four countries’ air forces are currently using the C-101. Among the countries concerned are Chile, Honduras, Jordan, and Spain. Ground strikes, reconnaissance, photography, and electronic warfare countermeasures are all possible with the C-101.

the firearms Bay can hold a laser designator reconnaissance or countermeasure devices, a 30-millimeter cannon with 130 rounds of ammo, or twin Browning m3 12 7 millimeter machine guns with 440 rounds of ammunition. The underwing hardpoints are capable of carrying a payload of 4,960 pounds, which includes the Laut n BR 250 and B are 125 bombs. Wow, three rocket launchers or AGM-65 Maverick missiles, and a C-101 cost between $5 million and $7 million.

Romanians built the IAR-99 SOIM advanced trainer and ground-attack aircraft to replace the Aero l-29 Delfin and l-39 Albatros jet trainers. Although the IAR 99 is primarily utilized for training, it also has a secondary light assault capability.

It can also do reconnaissance flights. The IAR 99 has four underwing hardpoints that can each hold 551 pounds and one center hardpoint that can hold 881 pounds. The aircraft is equipped with a single 23-millimeter twin-barrel gun mounted on the central hardpoint, allowing it to carry air-to-air missiles. Freefall bombs and rocket pods are examples of alternative weaponry. The IAR 99 sewing will set you back $8 million.

The SU-25 GRACH is a single-seat twin-engine jet aircraft built by Sukhoi in the Soviet Union. Its main objective was to provide close air support to Soviet ground forces. On February 22nd, 1975, the first prototype took to the air. At the forward edge and in the closest tactical and operational depth, the Sukhoi SU-25 GRACH is designed to defeat small mobile and immobile ground targets as well as engage low-speed air targets.

The Su-25 can carry laser-guided bombs weighing 771 to 1477 pounds, as well as incendiary devices weighing 1100 and 2 pounds and cluster bombs. The aircraft’s twin-barrel 30-millimeter cannon is mounted on the underside of the fuselage on the port side. It has 250 rounds of ammunition and can fire at a burst rate of 3,000 rounds per minute. The su-25 assault aircraft costs 11 million dollars.

The Embraer EMB 314 SUPER TUCANO, also known as the Embraer 829 Super Tucano, is a turboprop light attack aircraft developed by Embraer to meet the light combat needs of armed forces all over the world. The EMB 312 Tucano trainer has been superseded by this model.

Brazil, Colombia, Afghanistan, and Chile all have air forces. Ecuador and Indonesia are two of the world’s most populous The aircraft’s small size, low visual and radar signatures, and fast speed and agility provide it with exceptional survivability. Other survivability elements include armor protection and key system redundancy.

Weapons can be carried in five hardpoints, and the aircraft can carry a maximum external load of 3306 pounds. The plane is equipped with two wing-mounted 12 7 millimeter machine guns that can shoot 1,100 rounds per minute and can carry a variety of bombs as well as guided air-to-air and air-to-ground missiles. Super Tucano’s price ranges from $9 million to $18 million.

The ear cut corporation’s yak level yak-130 is a twin-seat advanced jet trainer and light combat aircraft that entered service with the Russian Air Force in February 2010. It is primarily intended for advanced flight training, but it can also perform light attack and reconnaissance missions. It has nine external stations with a total payload capacity of 6,613 pounds and an open architecture avionics suite.

The plane has a thirty-millimeter gun mounted under the fuselage, and it can also fire unguided rockets. Bombs weighing 551 pounds and 110 pounds, as well as cluster bombs The yak-130 is fifteen million dollars in price.

The AMX assault aircraft is used by the Brazilian, Italian, and Venezuelan air forces. The Italian Air Force received the first AMX aircraft in January 1989, followed by the Brazilian Air Force in 1990. Ground assault and visual and marginal weather circumstances are the AMX’s principal duties, with air interdiction, close air support reconnaissance, and armed patrol as supplementary missions. The plane may also be deployed as a lead-in fighter and performs admirably in air defense missions.

The AMX has seven hardpoints, one on the centerline of the underside of the fuselage, two hardpoints under each wing, and wingtip rails on each wing. The aircraft can carry external loads of up to 8,377 pounds.

The Fairchild Republic A-10 Thunderbolt 2 is a single-seat twin turbofan engine straight-wing jet aircraft developed for the US Air Force. The aircraft’s main missions are ground attacks on tanks, armored vehicles, and installations, as well as close air support for ground forces. The aircraft has 11 storage pylons with a 16,000-pound external load capability. The A-10 has a range of more than 27 miles and can carry up to ten Maverick air-to-surface missiles.

The Sidewinder air-to-air missile, which is an all-aspects or trained missile with a maximum speed over Mach 2, can also be carried by the A-10. The A-10 can carry cluster bombs and 498 pounds per barrel. The plane is also equipped with general dynamics. The a-10 Thunderbolt is an attack aircraft with a 30-millimeter gun located in the nose. The magazine may carry between 1,300 and 50 rounds of ammunition, and the pilot can choose between firing rates of 2100 and 4200 rounds per minute.

The T-50 golden eagle is a supersonic advanced trainer and light attack aircraft developed by the Korean aerospace industry in collaboration with Lockheed Martin.

The plane features seven external hardpoints for carrying weapons: one on the fuselage centerline, two under each wing, and an air-to-air missile launch rail at each wingtip. Nine Sidewinder missiles can be carried on the wingtip launch rails. According to mission requirements, Rocket pods, air-to-surface missiles, and air-to-air missiles can all be carried on the underwing and centreline hardpoints. The aircraft can carry up to 80 487 pounds of weaponry. The T-50 Golden Eagle costs $21 million to build.