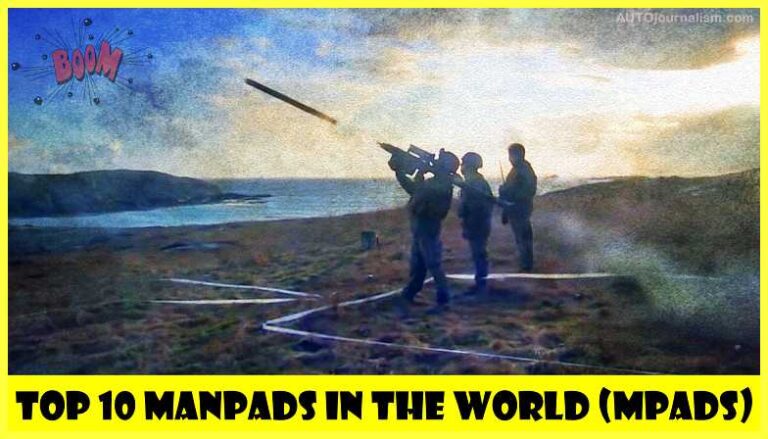 Here is the list of the Top 10 MANPADS in the world,  Surface-to-air missiles that may be carried about are known as man-portable air-defense systems (MANPADS or MPADS). They’re guided weapons that put low-flying planes, especially helicopters, in danger. The Gripstock is put together. The grip stock is secured to the launch tube by a clasp that permits it to be retracted (figure 3-1). The safety and actuator device, uncaging switch, firing trigger, IFF antenna assembly, IFF INTERROGATE switch, IFF interrogator connector, and Battery Coolant Unit (BCU) receptacle are all housed in the grip stock assembly. The replaceable grip stock is removed from the launch tube and reused after a missile is fired.

MANPADS, or man-portable air defense systems, are air-to-air missiles that can be fired by a single person or a small group against aircraft. These missiles are both inexpensive and widely accessible from a number of vendors. Over the last three decades, man paths have been successfully used in military confrontations as well as terrorist organizations, and they’ve garnered a lot of attention, particularly in the recent Russian-Ukraine issue, so without further ado, here are the top 10 man pathways in the world.

The Chinese air defense missile FN-6 (Fei Nu-6) is based on the French Mistral. It does, however, have a number of distinctions. It appears that the Soviet Strela-2 and the US Stinger had an impact on it. The FN-6 is a Chinese-made third-generation man-portable air defense system. China’s armed forces have received the FN-6. Bangladesh, Cambodia, Pakistan, Peru, Sudan, and maybe additional countries have received the FN-6 and its variants. Some rebel factions also utilize this missile. During the Syrian Civil War in 2013, this shoulder-launched missile was discovered in the hands of opposition forces. The FN-6 saw its first action and made its first air kills during this fight.

Under visible situations, the FN-6 is employed to protect friendly units, vehicles, and artillery from enemy helicopters, low-flying aircraft, and unmanned aerial vehicles. The maximum range of interception is 5.5 kilometers, while the maximum altitude is 3.8 kilometers. The FN-6 missile is a fire-and-forget weapon. It’s equipped with an infrared seeker. It was created to detect infrared energy and guide itself over extremely hot surfaces, such as the heat signature of an aircraft and, in particular, the inside of a jet engine. The seeker is unaffected by background interference like the sun, clouds, or horizon, as well as ground objects. This missile is said to be effective against infrared decoys in terms of anti-jamming.

A single missile’s hit probability against an unprotected target is at least 70%. If the target employs countermeasures such as infrared decoys, this number is lowered.

The FN-6 is a fighter jet that is used by air defense troops. The launcher is manned by a two-man crew. The FN-6 operates similarly to previous MANPAD systems like the Stinger. The time to launch is roughly 5 seconds once the launcher is on the shoulder, covers are removed, and sights are ready. A friend-or-foe identification system, similar to that used on the US Stinger, can be installed on the FN-6.

The FN-6 is known as the FY-6 when it is equipped with this technology (Fei Ying, meaning Flying Eagle). Vehicles, small watercraft, and helicopters can all be equipped with the FN-6 launcher.

The DRDO’s MPDMS is the world’s most advanced MANPAD under development, and Hyderabad-based Grene Robotics is working on an Autonomous MANPAD Data Link (ADML) system that will connect isolated MANPAD operators in a networked environment. AMDL is a cutting-edge data link technology that uses artificial intelligence to deliver a comprehensive air defense solution. India will be the 1st and Best country in the world to put this technology on MANPADS, which are widely used forward-deployed Air Defense Systems.

ADML will help to reduce friendly fire occurrences by assigning targets in real-time and managing the entire engagement cycle. MPDMS will have a dual-band infrared homing seeker or multi-spectral optical seeker weighing less than 20 kg, fire-and-forget capability, and the ability to engage aerial targets at any time of day or night with an effective range of 6 kilometers and a height of engagement of 3.5 kilometers.

This is a Polish man-portable air defense system based on the IGLA 9k38 missile, which was adopted in 1981 by the Soviet Union. During the 2008 Russian-Georgian war, 12 grown missiles were fired at Russian planes and helicopters, with nine of them hitting their targets, according to reports. The missile includes an infrared guidance system and a high explosive explosion fragmentation warhead weighing 1.27 kilograms. The missile has a contact detonation mechanism that detonates when it lands on its intended target. It can attack targets at a height of 3.5 kilometers and has a range of up to 5.5 kilometers.

It is an enhanced derivative of the IGLA, which is a Russian-made man-portable infrared homing surface-to-air missile defense system. Due to good target selectivity against background interference and a larger range of up to six kilometers, it possesses higher jamming immunity. In comparison to its predecessor, the IGLA-S has a heavier warhead with a laser-based contact proximity fuse. The warhead also has a higher explosive charge and fragment number. The a-glass system can engage cruise missiles and drones due to its high combat efficiency.

which resembles the American flick 92 Stingers in appearance Type 91 is classified as a fourth-generation MANPAD system, with a superior navigation system that includes both visible light and infrared options. The missile captures the target’s visual profile during launch and can ignore defensive countermeasures like flares. Improvements to the type 91 kai included a missile with an image infrared seeker, a smokeless motor, and the ability to shoot and target acquire targets faster. It was also improved for nighttime use, with a top speed of Mach 1.9.

This is a Teles-built British man-portable air defense system that speeds to more than Mach 4 after launch, making it the world’s fastest short-range surface-to-air missile with a high kill probability. the unbroken line of stars LML-NG employs television and thermal imaging cameras, as well as manual and automatic target tracking. The star-streaking missile can engage targets up to 7000 meters distant, and one of its key advantages is that it cannot be jammed by radar countermeasures or suppressed by anti-radar missiles.

4. MISTRAL ( Best MANPADS in the World )

is the Mistral, a man-portable air defense system developed by MBDA in France. The missile is small, light, and precise. It can reach a top speed of 930 meters per second and a height of 3 kilometers. The warhead of the missile weighs 3 kilos. It uses laser proximity detonation technology to reduce the chance of an early explosion. The menstruating man pads have a high kill probability and a 97 percent verified success record, making them more reliable than any other low-level air defense missile currently in use. This missile is also more maneuverable, even at high speeds.

Saab manufactures a Swedish man-portable air defense system. A thermal imager, built-in automatic target tracker, and enhanced visual cueing aids are all part of the integrated sighting system. The RBS 70 engine system has a maximum range of 8 kilometers and a maximum altitude of 5 kilometers for destroying targets. It can be used in conjunction with the pretend interrogator’s identification to identify friendly targets. The system is capable of firing missiles in tough terrains such as urban areas, and it can operate in all weather conditions at all times of day and night.

This is a new generation manned portable air defense missile system that was deployed by the Russian Federation’s armed services in 2014. Unmanned aerial vehicles, cruise missiles, and other low-flying air targets are detected and destroyed by the Verba MANPADS. It can engage targets in the presence of thermal noise and can operate independently or as part of a battery.

It makes use of a 9m336 missile, which can destroy targets flying at 500 meters per second at a maximum altitude of 4.5 kilometers. It can engage targets at a range of up to 6500 meters and has an 8-second reaction time. It may be used at any time of day or night and in any weather condition.

The basic model of the FIM-92a, which entered service in 1981, is a lightweight shoulder-fired man-portable air defense system developed by the United States. The stinger comes in a variety of versions, the most recent of which is more advanced and offers significant advantages over prior models. FIM-92A: It was designed by General Dynamics and manufactured by Raytheon missile systems, at a cost of around FIM-92A: ($119,320+) (US$38,000+) ( it can deal with low-flying planes and helicopters ). The warhead is a three-kilogram pure sinking hit-to-kill warhead with a self-destruct timer and an impact fuse. The warhead can be detonated by penetrating the target and striking it, or by self-destructing. The stinger missile has a maximum range of 8 kilometers and is destroyed 15 to 19 seconds after launch. Stinger missiles have a high degree of precision and can attack targets flying as high as 11,500 feet (3,500 meters). This means that if an aircraft is less than two miles up and visible as a shape, the stinger is most likely to hit it.

List of All Best Best MANPADS in the World