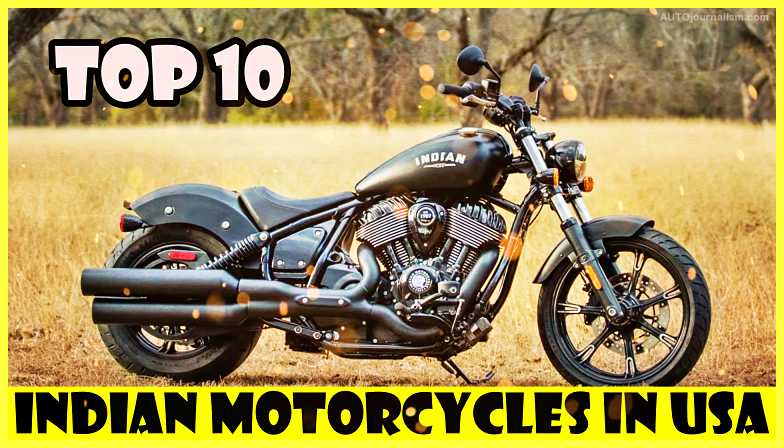 Here is the list of Top 10 Indian Motorcycles in USA, With a 121-year history, Indian is America’s first motorcycle company, but it is the last decade that truly reflects India’s recent rise to prominence, which can be attributed to the influx of funds from Polaris today we’ll cover the latest models that will come out of the spirit lake Iowa factory and custom workshops in 2022, including the industry’s most luxurious cruisers tours and street bikes.

Top 10 Indian Motorcycles in the USA

Pursuit of Indians In 2021, the challenger beggar became India’s answer to the Harley Davidson road glide. In a nutshell, the pursuit is the road glide limited’s predicted fully outfitted progression. The luxury grand tour has the same cast aluminum frame and 1768 cc liquid-cooled power plus v-twin mated to a 6-speed transmission with an assist clutch. This 122 horsepower big bore motor is big on torque with 128 pound-feet of peak twist at 3 800 rpm rock-solid on-road stability is assured by a chassis-mounted fairing and optional electronically adjustable fox to your suspension and inverted front forks

The bike has 35 gallons of waterproof storage, a remote locking storage system, an electrically adjustable windshield, heated seats, and cutting-edge technology including a right command plus a seven-inch multimedia system, cruise control, keyless ignition, and full led lighting. The Indian pursuit is presently available through trunks limited and darkhorse, with premium packages available.

The scout family’s roughest member attracts purchasers with its style and attitude. The bike’s new features include new numerous ape handlebars. Instead of the typical 16-inch front wheel, there’s a quarter fairing and a sport-style single seat. The front row gets a 19-inch ram, while the back wheel stays the same. Both wheels are wrapped in new Metzler cruise stack tyres. Adjustable piggyback rear shocks help improve the suspension. The newcomer, like other Scouts, is powered by a 1133cc liquid-cooled v1 engine with a 6-speed wet-clutch transmission.

A 3.3-gallon gasoline tank feeds the drivetrain, which produces 100 horsepower and 72 pound-feet of torque. A lean-sensitive pathfinder-led headlamp, smoked-led turn indicators, and a split dual exhaust are all available as options. Bernthal and INDIAN chief custom inspired by the realms of motocross racing, Kerry Hart created this one-of-a-kind Indian chief exclusively for the wants and specifications of the Walking Dead star.

Bernthal, John Kerry got to know John well and wanted to design a bike that would fit like a club in terms of size, ergonomics, aesthetics, and performance, showcasing the full range of customization options available for the new chief. The bike features a sportier riding position thanks to the newly added crossbar clamps, ODI bars, and grips. plus shift-brake packs in San Diego

The FTR was originally marketed as a scrambler, but the 2022 redesign is aimed at shifting the lineup into the sporty street naked class, with new 17-inch cast-aluminum wheels and Maxler sport-tech tyres standard on all grades except the rally. The suspension has been fully adjustable and the seat height has been dropped to 32 inches. The 1203cc v20 engine still produces 120 horsepower and 87 pound-feet of torque with 4.7 inches of travel.

However, it was tweaked to improve cold starts and provide a smoother ride. The 2022 FTR and FTR rally retain analog gauges, but the FTRS and our carbon get a configurable 4.3-inch digital LCD gauge display.

Gotakamine, a prominent Japanese builder, made one of the year’s most stunning customization projects. Their aesthetic style is about being simple and effective, two crucial attributes needed by a writer to navigate through heavy traffic. In terms of design, this construct adheres to a few stringent guidelines that characterize the brat style. It lacks showy embellishments in favour of bare metal aesthetics and a simple two-tone black and silver paint scheme.

The kin-eye will immediately see a reduced and narrowed fuel tank, altered handlebars, and new 1940s fenders. A mandatory brad style attribute is an eighth and lather solo seat. The factory fed its 1819 cc thunder stroke gives the same 79 horsepower and 108 pound-feet of torque, as the manufacturer does not specify any mechanical improvements.

With the 2022 challenger edition limited to 107 pieces, the long-standing alliance between America’s first motorcycle manufacturer and its first registered distillery is cemented once more. As usual, the bike is designed in collaboration with the clockworks custom cycles. The exterior of this jack Daniel’s challenger is inspired by Tennessee rye whisky and features a special variety of metallic paint with gold and green highlights. The rider and passenger floorboards are specially engraved with a numbered Montana silversmith badge.

As part of the limited edition package, the bike gets an adaptive pathfinder led headlight fox electronically adjustable rear suspension with preload 6-axis bosch imu and powerband audio. The 108 cubic inch power plus engine produces 122 horsepower and 128 pound-feet of torque, but riders can upgrade to the stage 1 air intake and oval slip-on muffler kit for 10% more power and 3% more torque.

Indian chief and darkhorse chief The original Chief V Twin became the most popular Springfield model in the 1920s, and the business has spent the last three years developing the all-new model to mark the cyclon Indian’s centennial. This next-generation chief has the same timeless, simple form but slims down and adds a slew of new features. The bike’s frame is made of steel tubes, replacing the old hydroformed aluminum chassis.

The bike’s cast aluminum rear subframe is no longer stripped, giving it a more lightweight appearance. It also features a single bumper seat that sits just 26 inches above the tarmac, mid-mount foot controls, and exposed rear shocks. The Chief comes in normal and dark horse versions, with either thunder stroke 111 or 116 engines that provide 108 or 120 pound-feet of torque, respectively.

The company has installed new black forks and a specially designed Allen’s racing piggybacks shock to the FTR’s frame. The bike also rides on Rotobox carbon wheels that house your brakes and come wrapped ready to download GP racer tyres.

While the model’s long-distance inclinations are evident in the standard black leather saddlebags rubber covered floorboards and a quick-release windscreen, abs cruise control, and, in the case of the limited, a four-inch round display with Bluetooth connected right command system are also available. Other features include a chrome dual exhaust large headlight bucket with the nacelle and a touring seat with a passenger pad.

The Indian backer lineup receives comparable updates as the rest of the brand’s portfolio, with a few model-specific updates for 2022. NDN focuses on focused improvements that improve the writer’s experience and increase convenience. To begin with, each challenger receives traction control, which now reacts more smoothly, as well as new colors. The portfolio also includes an expanded accessory catalog, which includes many luggage options. optional hard lower fairings, which were built specifically for the challenger, provide additional wind protection and all-new rear led saddlebag lights.

The luxury limited model is distinguished from the base model by premium chrome trim, paint-matched saddleback closeouts, and an aggressive fairing. Smart beam technology, Apple Car Play, and larger 6.5-inch speakers are also standard on the limited. Which model of 2022 is your own top pack? Both bikes have a 1768 cc liquid-cooled power plus v1 engine that produces 122 horsepower and 128 pound-feet of torque. Would you agree that Indian motorbikes are absolutely dominating their big competitors?