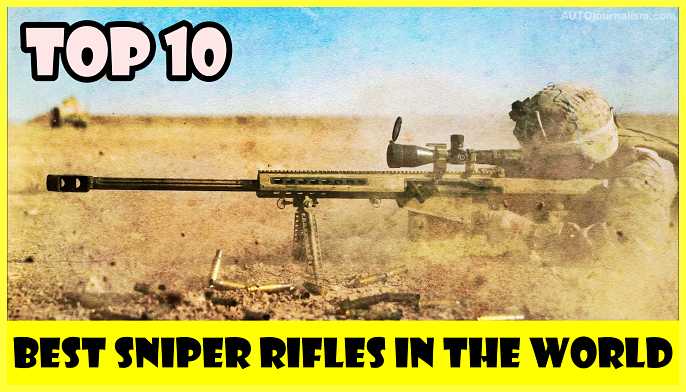 In light of recent news, we assess and rate the military forces (armies, land forces, air forces, navy forces, special forces, and others) of over 100 countries. In terms of technological advancement, we rank and review the greatest, most costly, quickest, and strongest military vehicles, weapons, types of equipment, aircraft, helicopters, carriers, destroyers, tanks, rifles, submarines, Top 10 Cars, Bikes, Vehicles, Military, and more on this Website. We keep an eye on current military issues and provide articles about breaking news. We can’t stop time, thus time flies, and articles become old, but we do update from time to time. Remembered from the past, we can only see the past, and everyone says that we can see the future. Isn’t it amazing?

List of Top 10 Best Sniper Rifles in The World

From 3,540 meters, the Canadian sniper shot a fighter. The rifle’s accuracy enables trained shooters to hit their targets with ease. From a long distance, this weapon may damage sensitive enemy equipment such as parked aircraft, radar systems, trucks, and several other key assets.

The AW50 is a British anti-material sniper weapon. The Arctic Warfare 50 rifle is designed for elite special forces and police groups. Since 1999, it has been employed by several countries, most notably the British special forces. It is 13.5 kilos in weight. It has a range of 1500 meters. The armor-piercing ability of the AW50 is well-known. It has a high level of effectiveness against several types of military vehicle armor.

The SSG 3000 sniper rifle was manufactured in Germany in 1992. Law enforcement agencies in Europe and the United States rely heavily on the SSG 3000. It is also utilized by many military shooters and special forces units all over the world. It has a 900-meter range of effectiveness. It weighs 5.44 kg.

Blaser Jagdwaffen designed the R93 Tactical, a German sniper rifle. It is utilized by law enforcement and military groups all around the world. It has a weight of 5.4 kilos. The effective range of fire is 800 meters. This weapon comes with detachable 5-round magazines. When inserted, the magazine is flush with the body’s underside. There are also 10-round magazines available as an alternative.

The M24 was the United States Army’s first weapon designed exclusively for sniping. It is still the principal sniper rifle used by the United States Army today. It went into service in 1988. 5.4 kilos is the weight. It is effective at 800 meters, but it also works at distances greater than 1000 meters.

More than 15.000 M24 rifles have been manufactured. Afghanistan, Brazil, Hungary, Iraq, Israel, Georgia, Japan, Lebanon, the Philippines, and the United States all have this rifle in their arsenals. Although it is not available on the open market, certain businesses build similar rifles like the M24 for civilian usage.

The SAKO TRG 42 is a long-range sniper rifle made in Finland. It is one of the world’s best sniper rifles. It is a better-made variant of the preceding SAKO TRG 41. It was first used in 1999. Muzzle brakes are commonly used on sniper rifles to reduce recoil, jump, and flash.

The Sako factory TRG muzzle brakes are detachable and vent sideways. It weighs 5.3 pounds at the curb. It has a range of 1500 meters. This weapon is used by many armed forces, including the Finnish Army.

Barrett Firearms Manufacturing created the Barrett M95, a manual bolt-action anti-materiel sniper rifle. It is designed to improve on the Barrett M90 rifle.

At long range, M95 is employed to destroy sensitive enemy equipment such as parked aircraft, radar stations, vehicles, and several other key assets. It was released in 1995. The operational range is 1800 meters. It has a curb weight of 10.7 kg. Spain, Argentina, Turkey, Austria, Denmark, Greece, Finland, Italy, Jordan, Georgia, Malaysia, the Philippines, and Thailand all utilize this weapon.

The Arctic Warfare Magnum is a sniper rifle made in the United Kingdom. It is a more powerful variant of the Arctic Warfare sniper rifle that is designed to employ larger and more powerful Magnum-type rounds. Muzzle brakes are designed to minimize recoil, jump, and flash while also serving as a foundation for aftermarket iron sights and suppressors.

It was released in 1996. It has a range of 1500 meters. It is 6.9 kilos in weight. Czechia, Germany, Ireland, Israel, Italy, Malaysia, the Netherlands, Norway, South Korea, and the United Kingdom all use it.

The SSG 69 is a sniper rifle manufactured in Austria. It appears to be a hunting rifle at first glance, but it was specifically intended as a weapon for military and law enforcement personnel. The weapon is the Austrian Armed Forces’ primary sniper rifle. It’s been in use since 1969.

This weapon is well-known for its precision. Because of its great accuracy rates, it is utilized by numerous armed forces all over the world. The SSG 69 is one of the world’s most popular sniper rifles. It has been employed numerous times in various types of military engagements. It has a working range of 800 meters. It has a curb weight of 4 kg.

The M82 is an anti-material sniper rifle manufactured in the United States in 1989. The Barrett M82 is designed primarily as an anti-material weapon. This gun was meant to destroy sensitive enemy equipment at great ranges, which would have previously required the use of rocket launchers, recoilless rifles, anti-tank missiles, mortars, or even artillery.

50 BMG shells are powerful enough to sever an enemy’s limbs and completely smash the brain. It has the ability to puncture light armored vehicles. This rifle boasts a one-of-a-kind recoil reduction device. According to reports, the muzzle brake absorbs 70% of the recoil. It weighs 12.9 kilos at the curb. It has a range of 1800 meters.