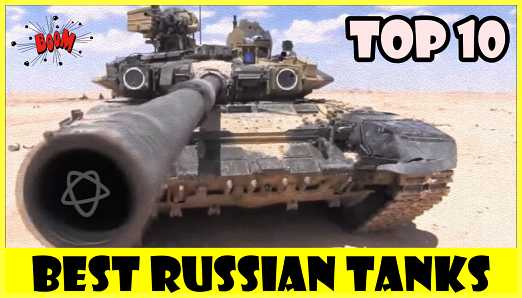 Here is the list of Top 10 Best Russian Tanks, All of these tanks are not in series, but the first five are. There is no doubt that America is a superpower in every way, but Russia is one of the best countries with advanced weapons such as the S400 and S500, as well as advanced tanks such as the T-34 and T-90. Russia has the most up-to-date and oldest weapons, and they also supply weapons to other countries such as India. So, let’s get started by learning about the Top 10 Best Russian Tanks that can defeat the enemy.

The Soviet T-34 is one of Russia’s most powerful tanks. In 1940, the T-34 was introduced, and it rapidly became a classic. It was created to address the flaws of the BT series of Cavalry Tanks. Those tanks were both lights and equipped sparsely. The T-34 Tanks were the most heavily armored of the BT series. Because of its thick and sharply slanted hull front, which was 45–47 mm thick, this tank was more efficient against German anti-tank guns. The T-34 Tank easily deflected the German Pak 36 tank. The early production cars were light and had wider tracks, giving them more off-road mobility—a big plus in the muddy Russian terrain in the spring.

The T-14 Armata tank in the Russian Federation Armed Forces’ most recent and most modern tank. This tank, which was displayed in the Victory Day military parade on May 9, 2015, has acquired the title of the world’s strongest tank. The T-14 astonished many because the tank’s development and production were kept so secret that the Russian Ministry of Defense only revealed a few details in 2011. This brand-new Russian tank has a crew of three and can go a maximum distance of 500 kilometers at a speed of roughly 90 kilometers per hour on the highway.

It also boasts the best defense system, which uses the most recent version of the Afghani protection system to defend tanks from anti-tank missiles, rockets, and RPGs. T-14 Armata is equipped with nuclear, biological, and chemical anti-weapons protection in addition to physical protection.

In addition to Armata, the T-90 is the second most modern tank owned by Russia after joining the military service in 1992. This tank became the last tank designed and tested during the Soviet Union. T-90 is directly mass-produced by the Russian Government and to date, there are at least 4 variants of the tank in the world, namely the T-90A, T-90S, T-90M, and T-90MS. The differences in each variant are in the installation of new secondary weaponry, engines, and defense system enhancements.

The name ‘Vladimir’ was given by the person who designed this beast. This was the manner the Russian government honored the legacy of its inventor. The ‘Curtain’ infrared guidance system and next-generation laser guidance system protection are two of the T-90A series’ distinguishing characteristics. The T-90A sports a “fairy tale” 1,000 horsepower engine in the back of the vehicle. When compared to the T-80U’s, it’s not as ravenous, but it comes close in terms of speed.

The T-80 was the last modern tank owned by the Soviet and Russian Armed Forces before the T-90 was conceived. The T-80 tank has been in production since 1970 and has been in service since 1976. Since Soviet times, the T-80 has been divided into two production types: T-80U and T-80UK for Russian manufacturing, and T-80UD for Ukrainian production. After the Soviet Union’s disintegration in 1991, Russia and Ukraine continued to produce T-80s in their respective forms, despite the fact that the two types no longer served the same master. In order to defend the T-80.

He employs explosive active iron, or ERA for short (explosive reactive armor). Although the T-80 resembles the T-90 in appearance, there is one significant difference between the two: the T-80 cannot swim. The Russian government has also exported the T-80 tank to countries across the world, including South Korea, Belarus, Egypt, and China.

If you want to find out what the eastern tank block is most interested in many countries in the world, then the answer is T-72. Tank T-72 is a highly respected battle tank in its era in the 1970s. Serving in the Armed Forces of the Soviet Union since 1973, there are at least around 1,700 T-72s who are still serving under the command of the Armed Forces of the Russian Federation, while 7,000 have become strategic viewers.

Those who are familiar with the T-64’s history will be aware that it was retired by the Russian Federation’s Armed Forces since superior tanks were available to replace it. Despite this, the Russian Ministry of Defense continues to preserve 2,000 T-64 tanks in strategic reserve status. T-64 tanks were first deployed in the Soviet Union in 1963, and mass manufacturing continued until 12,000 units were produced.

Following WWII, the T-54 Tank family was built to address the deficiencies of the T-34 designs. It does, however, have an underperforming 85mm cannon with weak armor. The T-54 and T-55 families have a striking visual resemblance. Small modifications were performed during normal maintenance to distinguish the T-54 from the T-55, resulting in the 54/55 series. The T-54/55 was a rather easy and straightforward machine to operate, according to Soviet tradition. Despite their diminutive stature,

Because of their compact design and wide tracks, Soviet tanks were able to move fast, although Soviet tank crews had to comply to height restrictions. The tank’s 100mm rifled gun was adequate in the 1990s, but it doesn’t stand a chance in today’s environment.

The British Vickers 6-ton tank served as the basis for the Soviet T-26 light tank. During World War II, it saw action. It took part in a number of conflicts during the interwar period and World War II.
It was one of the most successful tanks of its day until anti-tank gun upgrades rendered it obsolete. During the 1930s, the USSR built 53 different T-26 variants. So there you have it, our pick of the Best Russian Tanks for 2022. A large number of these tanks are being utilized in the invasion of Ukraine. We deplore the war in Ukraine, as well as any other events in the country.

The t-80 main battle tank has its origins in Soviet efforts to design a gas turbine engine-powered tank in 1950. However, it was not until the late 1960s that these efforts yielded a feasible concept demonstrator named the t-64t, after numerous waves of performance, reliability, and armament upgrades. The t-64t was further developed and placed into service as the t-80, one of the world’s first MBTs to use a turbine engine. The t-80’s outstanding power to weight ratio made it faster and considerably more nimble than the t-64 tank it was supposed to replace.

The t-80s gas turbine engine provided unrivaled mobility and dependable performance in Russia’s severe northern climes, but it was not without its drawbacks. The t-80’s fuel consumption was appalling, and the tank’s range of around 300 kilometers was far less than the t-64’s 500 kilometers. These issues would later be resolved with the Ukrainian-produced t-80ud variant, which was powered by a more conventional and much more fuel-efficient 1000 horsepower diesel engine, whereas the tank’s t-80u variant was still powered by a gas turbine engine, retaining the original t-80 model’s fuel efficiency issues.