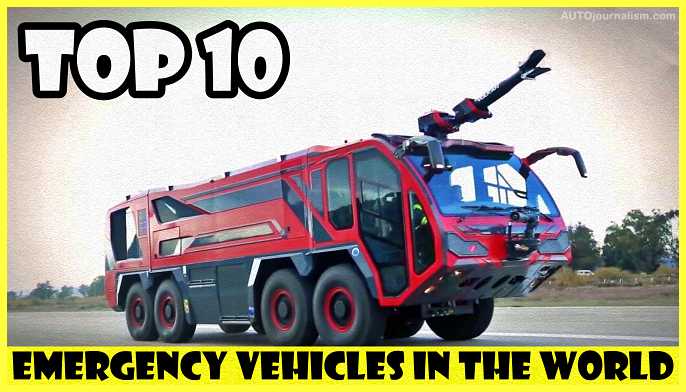 Top 10 Emergency Vehicles in the World

Here is the list of Top 10 Emergency Vehicles in the World, Emergency vehicles such as ambulances, fire trucks, police cars, ambulance helicopters, police motorcycles, fire fighting planes, medical helicopters, fireboats, special vehicles, or ambulance planes that are in service in various countries, amazing vehicles of various types such as ambulances or fire trucks that are used by emergency services in various countries for firefighting med, these are the Top 10 Emergency Vehicles in the World.

It is a high-performance motorbike designed specifically for the Italian state police, with excellent acceleration and low fuel consumption, making it perfect for patrolling and maintaining public safety. The state police have 90 units that went into service in 2020. They have a 1298 cubic centimeter engine with 144 horsepower and weigh 132 pounds. They have been fitted with unique equipment such as lighting, sound systems, and control panels. These cars are part of a specific program that will allow workers to do their duties to the best of their abilities.

It is a new patrol car from the Los Angeles Police Department that went into service in 2019 in the Hollywood division as part of a program aimed at reducing carbon emissions. This vehicle has a top speed of 155 miles per hour and can accelerate from zero to 60 miles per hour in 2.5 seconds.

It has a range of 370 miles and other equipment has been integrated to make it suitable for police usage. Each year, more police departments adopt Tesla vehicles as patrol cars.

It is a multi-purpose telescopic excavator built in Slovakia on the chassis of a Tatra 815 truck. It is used in firefighting and other crises to enable access to firefighters or rescue services. It is 30 feet long and has a hydraulic arm with a reach of 47 feet.

It is a high-capacity fire truck made in Turkey that is intended to provide a short response time in airport situations. It is 41 feet long and weighs 52 tons. It has two engines with 650 horsepower each and can reach a speed of 87 miles per hour. It can accelerate from zero to 50 miles per hour in 30 seconds and can traverse any terrain. Its tanks have a total capacity of 5000 gallons and can expel 3 170 gallons of water per minute at a distance of 360 feet.

It is a fireboat built in the United States that entered service in 2016. It is operated by the San Francisco Fire Department in the bay area, measures 88 feet long, has three engines with 750 horsepower each, operates with three crew members and four firefighters, and has a pumping capacity of eighteen thousand gallons per minute.

It has a top speed of 11.5 knots (13.2 miles per hour) and can carry millions of gallons of water directly from the bay to the city’s auxiliary water supply to fight street fires.

It is a helicopter made in the United States that is utilized in firefighting and other emergency situations. It is 68 feet long, weighs 8.7 tons, and has two engines that produce 4 500 horsepower each. It can reach a top speed of 125 miles per hour and has a range of 230 miles. It can hold 2 600 gallons of water and recharge your full tank in 45 seconds. This helicopter can reach isolated places rapidly and is now in use in countries such as Italy, Canada, and the United States.

It has been deployed effectively in nations such as Chile, Spain, and the United States, and it is now the world’s largest firefighting aircraft, operated by the worldwide supertanker corporation.

It is a popular ambulance among many countries’ emergency services that was manufactured in Germany. It is used to provide medical care to patients who are far from the hospital or to transfer them to a medical facility. It aims to reach the patient in less than 15 minutes from the time medical assistance is requested.

It has a 129-horsepower engine and can achieve speeds of more than 125 miles per hour. Depending on the sort of emergency, different personnel and equipment may be sent.

It is a medical helicopter manufactured in France by the Airbus corporation that is used as an air ambulance to carry patients to hospitals. It transports two pilots, doctors, and nurses, and is equipped with a stretcher and medical instruments. Its goal is to make transitions as quick as possible, and it is typically employed on short routes.

It has a range of more than 370 miles and a top speed of more than 155 miles per hour. There are several versions of this helicopter in use by emergency services in several nations.

It is a medical transport aircraft manufactured in Germany that is operated by the ADAC company. It is used to repatriate patients to their countries of origin who require this service for various reasons. It measures 68 feet in length and is equipped to provide intensive medical care. It can reach a speed of 460 miles per hour and has a range of 1860 miles. It has two pilots, a doctor, and two paramedics. This airplane, which is in service every day of the year, provides medical aid to thousands of patients from other countries.