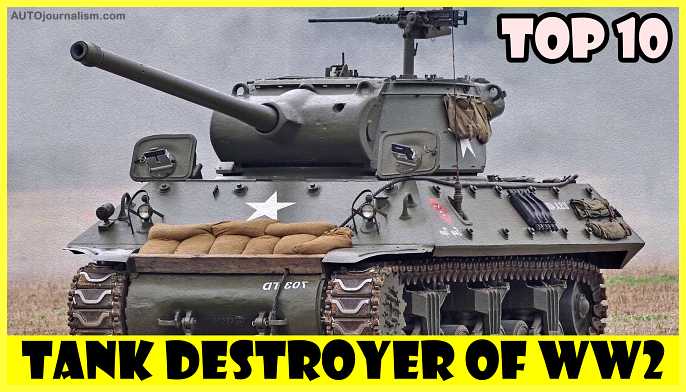 Here is the list of Top 10 Tank Destroyer of WW2, During World War II, a tank destroyer, tank hunter, or tank killer was a type of armored fighting vehicle equipped with a direct-fire artillery cannon or a missile launcher and designed specifically to attack and destroy enemy tanks, usually with limited operational capabilities. Tank destroyers have fallen out of favor since World War II, as militaries have embraced multi-role main battle tanks. In this article, we will showcase to you the 10 best tank destroyers during World War II or Top 10 Tank Destroyer of WW2, Please keep in mind that this is merely a ranking article.

The SU-100 saw widespread usage in the final year of World War II and continued to see duty with Soviet allies’ armies around the world for many years afterward. Export SU-100s remained in service until the 1970s in some nations, and even later in others. Yugoslavs utilized them throughout the civil war, but they were swiftly abandoned because of a scarcity of spare parts, despite their good performance.

The SU-100 is still in use by the Vietnam People’s Army and the Korean People’s Army ground forces. The SU-100 quickly demonstrated its ability to penetrate the 125 millimeters and 80-millimeter armor of the German Panther. It was a Soviet tank destroyer armed with a hundred-millimeter anti-tank gun and weighing approximately 34.8 tons.

The SU-152 is a Soviet self-propelled heavy howitzer that was used during WWII. It mounted a 152-millimeter gun-howitzer on the chassis of a kV-1s heavy tank and was capable of knocking out the heaviest German armored vehicles such as Tigger panther and elephant tank destroyers despite not being designed for the role.

The SU-152 proved to be a low-cost, extensively produced, and effective heavy tank killer, second only to the SU-100 as an anti-tank vehicle. It was also highly successful in its initial mission against infantry and fortifications in combat. Long-range artillery fire was used to disrupt infantry and destroy pillboxes and at guns during the assault. The front armor of the tank was 75 millimeters thick and weighed around 50 tons.

The m36 Jackson tank destroyer was an American tank destroyer used during World War II. It first saw combat in Europe in October 1944, partially replacing the m10 tank destroyer. It also saw use in the Korean War, where it was able to defeat any of the Soviet tanks used in that conflict. With the advent of heavy german armored tanks, standard tank destroyers were rapidly becoming obsolete due to their main armament.

They had difficulties engaging these new tanks in front of them beyond a few hundred yards. By late summer 1942, American engineers had begun to consider the feasibility of developing a new tank destroyer armed with a 90-millimeter gun. m936 was one of these tanks that aided in the defeat of the horrible nazi panzers during WWII.

The ELEFANT tanks were designed to kill Soviet T-34 tanks and 76.2-millimeter anti-tank guns from behind the front lines with its 88-millimeter gun at a range of more than three kilometers each roll, which it did well.

The remaining ELEFANT tanks participated in a number of rare guard actions in 1943 before being recalled to be repaired and overhauled. They were the most successful mass-produced tank destroyer employed during the war in kills per loss, with an average claimed ratio of approximately 10 to 1. They had a maximum armor thickness of up to 200 millimeters and weighed up to 71.6 US tons.

The M-10 Tank was the most important US tank destroyer in World War II in terms of numbers. It was equipped with a 76.2-millimeter m7 cannon in a rotating turret and was based on a modified m4a2 tank chassis.

During the war, the principal employment of the m10 tank destroyer was the United States, but many will land leads to the United Kingdom and Free French forces, and several dozen were also supplied to the Soviet Union.

Because of the low silhouette stock trees were very easy to camouflage and be hidden and with tough targets to destroy, This tank weighed just about 26.9 US tons and served as assault guns and tank destroyers on all fronts from Russia to North Africa, Western Europe, and Italy.

The HETZER was a German light tank destroyer of World War II that was based on a modified Czech tank chassis. It was totally armored and had a compact design and low silhouette, providing it a significant defensive advantage over other self-propelled guns. The armament consisted of a 75-millimeter gun with a fixed mounting and two remote-controlled mg34 machine guns.

Due to the ease of production and high running rates, it featured a wide body to accommodate the four-man crew as well as a strengthened lower hull with bigger wheels, guide rollers, and tracks. In the final stages of the war, HETZER became Germany’s premier tank destroyer, making significant contributions on both the eastern and western fronts.

The JAGDTIGER is a World War II German casemate type heavy tank destroyer built on the somewhat longer chassis of a JAGDTIGER 2. The 79-tonne JAGDTIGER was the heaviest armored fighting vehicle used operationally by many World War II participant nations, and it is the heaviest combat vehicle of any type to achieve serious production during the conflict. It was armed with a 128-millimeter pack main gun capable of outraging and defeating any tank or AFV fielded by the allied forces.

It saw limited action in small numbers on both the western and eastern fronts from late 1944 to the end of the war. Due to its enormous weight and considerably weak powertrain system, the JAGDTIGER was constantly afflicted with different mobility and mechanical problems. Currently, three JAGDTIGER can be seen in museums around the world.

The m18 hellcat was a World War II American tank destroyer that was also used in the Korean War. It was the fastest armored fighting vehicle on the road. The speed was achieved by minimizing armor, employing a novel automatic gearbox, and outfitting the comparatively light vehicle with the same main armament as the considerably bigger Sherman tank.

The m18 hellcat’s armor was relatively light in order to support its rapid speed, and it gave very little protection from the most commonly used german anti-tank weapons. The most effective tank destroyer was the M-18 Hellcat used by the United States during World Conflict II, with a greater KILL, The tank destroyer had a higher kill-to-loss ratio than any other tank or tank destroyer employed by US forces throughout the conflict.

The yak panther was considered the most successful German tank fighter and possibly the best in the entire Second World War, combining the 88-millimeter KWK-43 gun from the Tiga 2 with the fast mobile panther platform. Due to the lack of a revolving turret, the gun was laid by neutrally maneuvering the entire vehicle.

However, this was offset by the 88-millimeter gun’s long-range accuracy, which made the jack panther very effective in an ambush, allowing the jack panther to destroy allied tanks at long range while moving the vehicle a small amount to acquire each target. During the war, over 400 tanks were produced, seeing action on both the eastern and western European fronts.

I completely agree that Jagpanther HETZER and Stug 3 should be on the list, but I would have placed the Jagtiger and Elefant far lower or not included them at all. I would have substituted the Jagpanzer 4 and the Achilles. Also, I would have rated the SU-100 higher because it was finally a vehicle capable of competing with the huge German cats at long range.

The Su-100 is the best tank destroyer of WWII. It is based on a T-34-85 platform and is armed with the most powerful long 100 mm anti-tank gun of WW2. Unlike previous versions, it participated actively in practically all post-World Military II war engagements in the 1950s, 1960s, 1970s, and 1980s. It is still used by certain armies around the world.

Oversized firearms will demolish anything, but that does not make a successful design. If a 75mm lens could accomplish the job, the design was sound. A 100mm is not because it wastes resources. None of the tank destroyers built by the United States were particularly successful. Part of the reason for this was that the United States was on the offensive, and a tank destroyer is a defensive weapon.

Cost is an important factor to consider. If using a tank destroyer does not save you any money, simply utilize a tank. And if you lose one tank destroyer for every ten tanks destroyed, but your tank destroyer costs more than five of the tanks you destroy, you’re not doing so well. In general, the HETZERis a fantastic design since it is cheap, requires few resources, is light and tiny, and the long 75mm gun does the job, and the STUG III is likewise a great design for the same reasons. With the US tank destroyers, you don’t save much money over a tank.

On paper, Jagdtiger had a lot of potentials. However, it was faulty in every manner. Every time it moved, it had to re-calibrate its main hun. And if it’s all about firepower. The ISU-152 will come in second, if not first place. Aside from that, the 152mm is not a howitzer. It has the same velocity as the Sherman’s 75mm and T-34’s 76mm guns.

Comparing the Su-152 to the Su-100 Someone failed to complete their homework. The Ferdinand should not have been included because it was mechanically unreliable even by German standards. It was a last-ditch weapon created when Germany was on the offensive; it was too slow to leave, and if it didn’t win, it was doomed.

The Panzerjäger 38(t) was a late-war shambles because there was no sight for the gunner on the early variants, the 7.5cm gun was not as powerful as other guns on the list before it, and its armor was only useful at range and against medium velocity 75s and was rendered worthless by both close range as a Sherman could just look down on it rendering the angle useless, and by later 76 Shermans which could just laugh at its shape and blow it up.

The m36 “Jackson” was an excellent tank with a tiger-killing 90mm gun similar to that used on the Pershing; it outperformed the m10.
The Su 100 was a mass-produced cramped disaster that needed no further explanation.
Many Jagdtigers broke down and were destroyed by their crews due to their unreliability.
The Elefant should be ruled out because it couldn’t climb a slight incline without breaking down and catching fire.

The Jagtpanther is considered the best by practically every expert for its very good gun, armor, and speed (only a few hundred were built), followed by the STUG ll (not really built as a Tankkiller, but with very good Crews) with more kills than everything else on this list.
The American Tank Killer is nothing more than flimsy tin cans.
The majority of German tank losses on the Western Front were caused by aircraft or blown up by their own crews due to a lack of fuel.
(More than 70% of the losses)

Every American tank was a deathtrap; anything more than 5cm will kill a Sherman.
Tiger/ Panther to Sherman kill ratio was one to ten.
It’s simple to flank a German tank when you have ten times the troops.
The 88 Jagttiger and 90 Ferdinand were only designed to be used with pre-built carriages.

Top 10 Emergency Vehicles in the World