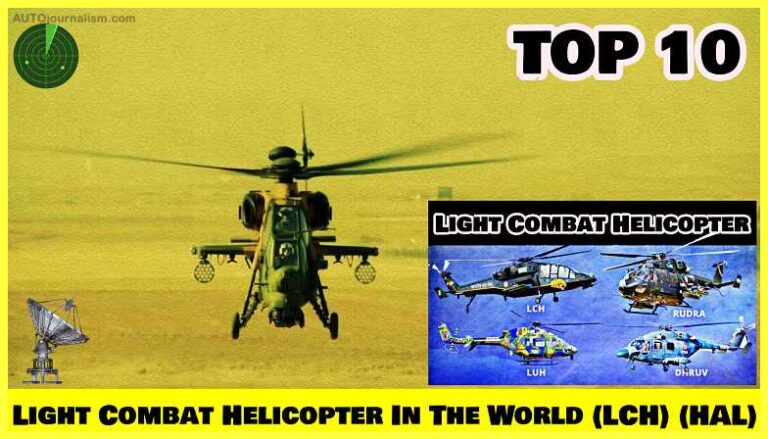 Recently the Government of India has approved 15 Indian-made helicopters for the army. Today we will talk about HAL Light Combat Helicopter or LCH. Hindustan Aeronautics Limited’s Light Combat Helicopter (LCH) is a multi-role assault helicopter designed and manufactured in India. HAL openly declared in 2006 that they were developing a light combat helicopter. In January of that year, the LCH completed initial ground tests followed by its first flight test in March 2010. The LCH has the highest flight ceiling among all attack helicopters and is equipped to carry out high-altitude missions.

Note: This is not a comparison or a complete list, and it may change at any time. However, I can promise you that these are all Light Combat Helicopters WOTH the correct information, which you will not find on Wikipedia or other websites, or even on the entire Internet in one place. Furthermore, you will receive more than 10 LCH from this article.

List of Top 10 Light Combat Helicopter In The World ( LCH )

The Dhruv (Pole Star) Advanced Light Helicopter (ALH) was developed in-house by Hindustan Aeronautics Limited’s Helicopter Division (HAL). It is a light (5.5t class) multirole and multimission helicopter designed for Army, Air Force, Navy, Coast Guard, and civilian missions in both day and night utility and attack duties. In 2000, the helicopter, which was designed to FAR 29 criteria, went into series production. Dhruv MK-I, MK-II, MK-III, and MK-IV, or Weapon System Integrated, are the four major variations (WSI). As of March 2017, HAL had produced 228 Dhruv helicopters, with 216 in service with the Indian Armed Forces.

Hindustan Aeronautical Limited designed and produced the light combat helicopter (LCH) (HAL). It’s an attack helicopter that’s based on the existing Dhruv. The LCH can be used for a variety of missions, including scouting, insurgency, damaging enemy defenses, search and rescue, anti-tank, and scouting. Throughout the network, a datalink system provides mission data to mobile platforms and ground stations. The LCH was designed to satisfy the needs of the Indian Air Force and Indian Army, which have each bought 62 and 114 units. In March 2010, it took off for the first time from Bangalore.

The LUH is being conceived and developed as a replacement for the Indian Armed Forces’ Cheetah and Chetak helicopters. The LUH is a new generation 3-ton helicopter with cutting-edge technology such as a Glass cockpit with Multi-Function Displays (MFD) and is powered by a single Turbo Shaft engine with enough power margin to handle demanding high-altitude missions. In the future decades, LUH will address the expanding needs of this class of helicopters. The helicopter will have a top speed of 220 km/h, a service ceiling of 6.5 km, and a range of 350 km with a payload of 500 kg.

Commuting, cargo/material transport, casualty evacuation, Search & Rescue (SAR), Aerial Survey & Patrolling, Emergency Medical Services, Off-shore operations, and Underslung activities are all possible with the helicopter. HAL has developed and sold over 350 of these versatile helicopters, which are currently in service in India and overseas. MOD Namibia and MoD Suriname have recently placed orders for Chetak helicopters with HAL.

The Mangusta A129 was the first dedicated attack helicopter built in Western Europe. In 1990, the Italian Army received the first helicopters. With the conclusion of the Cold War, Mangusta production was halted in 1992 due to funding issues and changing operational needs. Later, all Mangustas in Italy were updated to meet the A129 International standard.

The TAI/AgustaWestland T129 ATAK is a multi-role, all-weather attack helicopter with two engines and tandem seats based on the Agusta A129 Mangusta chassis. Turkish Aerospace Industries collaborated with Agusta Westland to build the T129. The helicopter is developed for sophisticated assault and reconnaissance missions in both day and night settings in hot and high regions with rugged terrain.

The Turkish Armed Forces needed an attack and tactical reconnaissance helicopter, hence the ATAK program was started. The T129 is the product of Turkish-developed avionics, airframe upgrades, and weapon systems being integrated into the AgustaWestland A129 airframe, together with updated engines, transmissions, and rotor blades. The Turkish Army and other services, such as the Turkish Gendarmerie, employ it.

(China) The Chinese Z-10 is the country’s first dedicated assault helicopter. Eurocopter and Augusta provided considerable technological assistance in the development of the aircraft. According to some reports, the Russian Kamov helicopter design bureau contributed to the development of this attack helicopter. Anti-armor and battlefield interdiction are the primary goals of the Z-10. It has the ability to engage in limited air-to-air combat as well.

In the South African Air Force, the Denel AH-2 Rooivalk is an important attack helicopter. It was released in 2011. The attack plane is armed with a 20 mm cannon and is capable of carrying air-to-air missiles, anti-armor missiles, and unguided rockets. It also has a target acquisition system and a sophisticated navigation system. GPS, infrared, and Doppler radar systems are all used. It is regarded as one of the world’s best attack helicopters. Other countries’ air forces also utilize this gunship.

France and Germany collaborated on the Eurocopter Tiger. It’s a medium-weight assault helicopter that first saw action in 2002. Australia and Spain are among the countries that use it. The Tiger has fought in Afghanistan, Libya, and Mali.

Changhe Aircraft Industry Group (CAIG) of China designed and constructed this triple-engine multi-role helicopter. The Z-19 light attack and reconnaissance helicopter has a stealthy design that includes a reduced forward fuselage and a tandem cockpit. It also has a minimal acoustic signature and is capable of performing operations in adverse weather and environmental situations.

The Ka-52 is a development of the Ka-50 and a two-seat version of it. This assault helicopter was first used by the Russian Army in 2008, and small-scale manufacturing began in 2009. Because of its two coaxial contra-rotating main rotors, the Ka-52 is one of the fastest and most nimble attack helicopters. This gunship’s armor can withstand projectiles with a diameter of 23 mm. Ejection seats are used by pilots.

The fuselage houses a four-bladed main rotor with a diameter of 11.9m, as well as a fenestron tail rotor and two stubby wings. Non-retractable front landing gears are also installed on the fuselage for safe takeoff and landing. The helicopter has a length of 12 meters and a height of 4.01 meters. The empty weight is 2,350kg, while the maximum take-off weight is 4,500kg. The helicopter is operated by a two-person crew. This includes the pilot, who sits in the front of the cockpit, and the gunner, who sits in the back. The cockpit is equipped with crash-resistant seats and armor panels to protect the crew. For defense against infrared-guided attacks, an infrared-suppressing exhaust system is also installed.

Here is the list of all Major features of the HAL Helicopter ( Made in India ):

LCH has a tandem cockpit to accommodate a pilot and co-pilot or gunner. It measures 15.8 m long, 4.70 m in height with 4.7 m wingspans. The maximum take of weight is 5,800kg including 700 kg of payload. LCH is powered by two HAL Turbomeca Shakti-1H1 turboshaft engines, each engine produces a maximum output power of 1,032 kW or 1,384 hp, and it features a Full Authority Digital Electronic Control system. Maximum speed and Never exceed the speed of LCH are 268 km/h and 330 km/h respectively with an endurance of 3 hours 10 minutes. LCH has a maximum range of 500km with full payload and the ferry range is 700 km. LCH can operate at a maximum altitude of 21,300ft with a full payload.

LCH has 20mm M621 cannon is combined with a Nexter THL 20 turret and integrated into a helmet-mounted sight. The LCH features four hardpoints, two on each wing, from which it may launch rockets, air-to-air missiles, anti-tank guided missiles, and bombs. It has the capability of incorporating both foreign and Indian-made weapons. LCH can fire HELINA, Helicopter-launched Nag, Dhruvastra, and SANT or Standoff Anti-tank Guided Missile. Mistral air to air missile, 20 mm gun, and 70mm rocket-firing trials have been completed.

The LCH is equipped with state-of-the-art avionics that includes Elbit CoMPASS Onboard Sensor Suite, Electronic Warfare Suite, an integrated data link that enables network-centric warfare, and helmet-mounted sight. Bharat Electronics Limited manufactures the Elbit CoMPASS Onboard Sensor Suite. The suite includes a CCD camera, a forward-looking infrared imaging sensor, a laser rangefinder, and a laser designator for target designation in all weather, day, and night conditions. The Electronic Warfare Suite was developed by Saab Group, a South African company. A missile approach warning system, a radar warning receiver, and a laser warning receiver are all part of the package.

The LCH is equipped with a glass cockpit, integrated architecture, and display system, digital camouflage system, crashworthy bottom structure, crashworthy fixed tricycle landing gear, crashworthy self-sealing fuel tanks, armor protection, For low radar cross-section, an infrared suppressor is attached to the engine exhaust, and the outside is covered by canted flat panels. The LCH also has an integrated dynamic system, which incorporates a hingeless main rotor and a bearing-less tail rotor, as well as an anti-resonance isolation system for vibration reduction.

A total of 179 LCH are planned to be ordered, 114 for the Indian army and 65 for the Indian air force. LCH will be produced at HAL’s Helicopter Division, based in Bengaluru, and can deliver 30 helicopters per year.