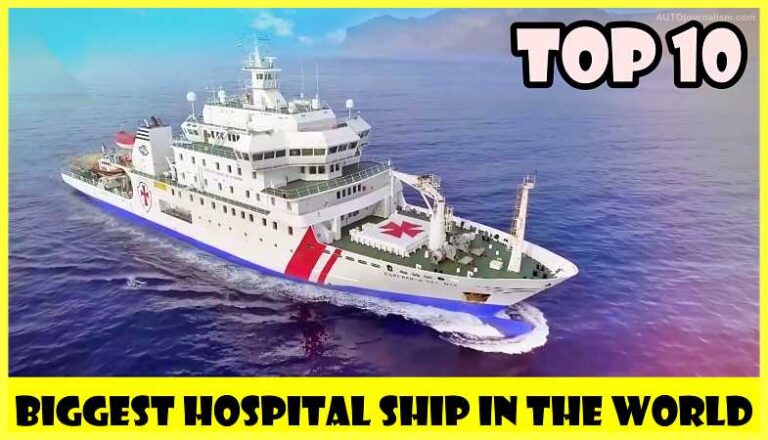 Here is the list of the Top 10 Biggest Hospital Ship In The World, The ten largest hospital ships in the world are remarkable civil and military ships equipped with superior medical units that traverse the world offering medical help in war or humanitarian operations.

List of Top 10 Biggest Hospital Ship In The World

It’s a ship managed by a non-profit entity that navigates the Amazon river serving people in need. It measures 32 meters long by 8 meters wide and weighs 320 tons. It has space for more than 10 crew members and 20 medical professionals. It sails under the Brazilian flag and was built by the innate shipyard in Brazil in 2019. It is equipped with a surgical facility, pharmacy, laboratory, and various consultation rooms and is utilized to provide health and dental care to over 700,000 people living in Amazon riverbank settlements.

It was built at the Izar shipyard in Spain in 2006 and sails under the Spanish flag. It is part of the navy’s social institutions and is equipped with a heliport and fast response craft. Its main goals are to help merchant mariners in the fishing fleet and to give technical and logistical support to neighboring vessels. It can accommodate 30 crew members and more than 20 patients. It is 75 meters long, 14 meters broad, and has a displacement of 2200 tons. It has two engines that produce a total of 4500 horsepower, and it can attain a top speed of 15 knots.

It is the first hospital ship built in Spain and is owned by the Social Institute of the Navy. It sails under the Spanish flag and was built by the izar shipyard in 2001. It is designed to navigate in extreme weather conditions and to provide medical assistance to any ship that requests it. It has space for 38 crew members, 34 health workers, and 16 patients. It has a displacement of 4 900 tons, is 97 meters long by 17 meters broad, and has two engines with a total of 9 300 horsepower. It can reach a top speed of 17 knots.

It is operated by the Chinese People’s Liberation Army Navy and sails under the Chinese flag. It measures 109 meters long by 17 meters wide, has a displacement of 4000 tons, a range of 5,000 nautical miles, and can transport an ambulance helicopter. It is used to provide medical care to civil and military personnel primarily in the Nonsha Islands in the China Sea.

It is capable of worldwide humanitarian assistance, emergency rescue, and personnel transport. It offers more than 100 beds and numerous medical departments with cutting-edge technology.

It is used to provide hospital care and support armed forces on land and water. It sails under the Indonesian flag and was manufactured by the PTPAL Indonesia firm. It has a capacity of 640 persons, including 120 crew members and 66 doctors. It is operated by the Indonesian navy and can transport medical helicopters or fast response craft. It measures 124 meters long by 21 meters wide and has a displacement of 200 tons. It has a range of 30 days or 10,000 nautical miles and can attain speeds of over 8 knots.

It was built in 1980 at the Elsinore shipyard in Denmark and sails under the Maltese flag. It is equipped with 5 operating rooms, 80 patient beds, and multiple equipments that allow it to perform 7 000 interventions per year. It has space for a crew of 450 people and volunteers from more than 50 countries have served. It measures 152 meters long by 23 meters wide.

It has more than 200 crew members and is equipped with 300 beds and a k25 helicopter that is always on its helipad. It measures 153 meters long by 19 meters wide and has a gross tonnage of 9 600 tons and a carrying capacity of 3 400 tons. It sails under the Russian flag and was built in 1990 at the stretched shipyard in Poland. It is used to care for injured or sick people, evacuate people from ships, or supply medical equipment.

It is the world’s largest civilian medical ship and is run by the humanitarian organization Mercy Ships. It sails under the Maltese flag and was built in 2021 by Xingang shipbuilding heavy industry. It offers several facilities where a variety of surgeries can be performed, as well as medical care for those who do not have access to health care. It is 174 meters long and 29 meters broad, with a gross tonnage of 37 800 tons and a cargo capacity of 500 tons. It is powered by four engines totaling 15,500 horsepower and can attain speeds of over 14 knots.

It is known as the ark of peace and belongs to the Chinese people’s liberation army navy. It sails under the Chinese flag and was built in 2007 by Guangzhou shipyard international. It is equipped with 300 beds and eight operating theaters and can execute 40 major surgeries each day.

It was built in 1976 in country and was originally an oil tanker that was acquired by the US navy in 1984 and converted into a hospital ship. It measures 272 meters long by 32 meters wide and has a displacement of 65 000 tons. It has two engines with a total capacity of 24 500 horsepower and can reach a top speed of 17 knots. The USNC Comfort is a sister ship, and both ships’ roles are to offer medical services to the United States’ military forces and to assist in humanitarian missions.