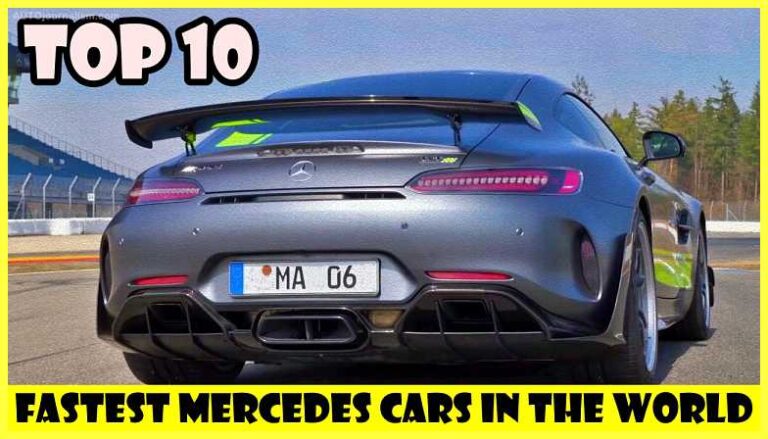 Here is the list of Top 10 FASTEST MERCEDES CARS In The World, In the automobile industry, the quickest Mercedes-Benz cars have been around for nearly a century. It is a globally recognized brand that specializes in super-luxury, ultra-high-speed automobiles. They’ve also developed a number of distinctive autos that were ahead of their time, which explains why they’ve been able to outperform their opponents for so long. Engineers at Mercedes-Benz are working to make their vehicles lighter, faster, more powerful, and easier to control. Mercedes-Benz has manufactured various cars that have smashed numerous records in terms of speed.

List of the Top 10 Fastest Mercedes Cars In The World

top speed 196 miles per hour 315 kilometers an hour just of release not too long ago the all-new sl is no longer a benz branded model as it’ll be sold exclusively as an amg as a result it not only has an appealing outside but is an absolute monster on the inside under the long hood the sl-63 is powered by a 4-liter twin-turbo v8 engine that produces 577 horsepower and 590 pound-feet of torque the roadster can reach 62 miles per hour from a standstill in just 3.6 seconds with this power it’s expected that when sold on the market its price will not be less than 130 thousand dollars

top speed 198 miles per hour 319 kilometers an hour mercedes amg introduced the gtr pro with the 2018 los angeles auto show the limited edition is based on the track focus gtr but brings even more goodies aimed at slashing lap times the pro features the same 4 liter twin turbocharged v8 as the amg gtr producing 577 horsepower and 516 pound-feet of torque enough for 0-62 mile per hour acceleration in 3.6 seconds power is fed to the rear wheels through a 7-speed dual-clutch gearbox via an electronically controlled limited slip differential unfortunately just 750 are destined for production and you’ll need to front up to two hundred thousand six hundred forty five dollars to own one

top speed 199 miles per hour 320 kilometers an hour the SL 65 AMG was unveiled in Monterey in 2008 it’s the third black series car to come from AMG it’s powered by a 6 liter bi-turbo v12 engine developing maximum output of 661 horsepower and maximum torque of 738 pound-feet Mercedes claims the SL-65 black series will blast from zero to 62 in just 3.8 seconds and takes 11 seconds to reach 124 miles per hour sadly only 350 units were ever made meaning the chances of seeing one in real life is super slim its price when new was three hundred thousand dollars

maximum speed 325 kilometers per hour 202 miles per hour The mercedes amg gt black series is the sixth model to bear the black designation. It is powered by a four-liter twin turbo v8, but amg made enough changes to warrant a completely different engine code, including changing the way the engine fires by installing a flat plane crankshaft. The result is 720 horsepower. and 590 pound-feet of torque a 3.1 second to 60 mile per hour dash and it’s the second quickest production car around the nurburgring with a lap time of 6 minutes 43.6 seconds only the manti accessorized porsche 911 gt2 rs does it quicker it has a 325 000 base price making this the amg that costs true supercar money

The new brabus rocket 900 bi-turbo v8 enlarged displacement engine, which thanks to the displacement increase to 4.5 liters, has a top speed of 205 miles per hour 330 kilometers per hour and is at the core of this bravos top of the line automobile. A new high-performance forced induction system produces 900 horsepower at its peak. although the engine produces a peak torque of 922 pound-feet it’s limited to 774 pound-feet it can sprint from 0-62 in just 2.8 seconds and 0-124 miles per hour and 9.7 seconds braavos is only building 10 units of the rocket 900 priced from around 516 000 in europe over three times the price of a standard GT63s.

top speed 209 miles per hour 336 kilometers an hour the slr mclaren 722 edition was introduced in 2006. the name 722 edition symbolizes the famous victory by british racer sterling moss and co-driver dennis jenkinson at the mila migla in 1955 driving a mercedes-benz 300 slr with a starting number 722 at the heart of the car is a 5.5 liter supercharged v8 assembled by hand at the mercedes amg engine workshops and a falterbock germany based on the one man one engine principle has a power output of 641 horsepower and 605 pound-feet of torque it can accelerate from zero to 62 in just 3.6 seconds zero to 124 miles per hour in 10.2 seconds and miles per hour in 27.6 seconds only 150 units were produced and its price is 480 000

top speed 214 miles per hour 344 kilometers an hour the CLK GTR was designed as a race car first and a road car second with little mine paid to driver comfort and road-going behavior with a mid-mounted 6.9 liter v12 producing around 604 horsepower and 572 pound-feet of torque enough for zero to 62 mile per hour acceleration in 3.8 seconds Mercedes-Benz only built 26 road-going CLK GTRs Only six were roadster models, each costing around 1.5 million dollars, making it the most expensive road automobile ever manufactured at the time.

top speed 217 miles per hour 349 kilometers an hour the mercedes-benz slr mclaren sterling moss was unveiled at the 2009 north american international auto show a lightweight speedster variant of the slr is potent in performance as it is arresting an appearance taking inspiration from the iconic 300 slr the carbon fiber-bodied speedster has a supercharged 5.5 liter v8 engine with 650 horsepower channeled to the rear wheels through a five-speed automatic transmission borrowed from the slr 722 the hardware granted the hardcore special edition with a sprint to 62 miles per hour in less than three seconds just 75 examples were built and each car costs in excess of one million dollars.

top speed over miles per hour 349 kilometers an hour the mercedes amg one was unveiled at the 2017 international motor show Germany as a concept car and confirmed to finally enter production in mid-2022 if specifications remain unchanged from the concept the production AMG-1 will become the fastest most powerful car ever built by Mercedes the hypercar was built around a 1.6 liter turbocharged v6 with electric motor assistance all of it based on what powers the Mercedes formula one race car it’ll sport a massive power output of over a thousand horsepower when the car made its debut in 2017 AMG claimed that it’ll be capable to sprint from 0 to 124 miles per hour in less than six seconds just 275 examples will be produced and all have now been sold for a price of 2.72 million.

The CLK GTR “only” does about 198mph without the Supersport upgrades if I recall correctly. Btw Brabus had a ton of other fast cars even back in the 90s like the 582hp E V12S(206mph) SL65s and S65s with the 630hp v12 engine were also known to hit upwards of 200mph on the autobahn with the electronic limiter removed. But I guess those days are over because of the new restrictive Tyres and the fact that fast cars now all weigh close to two tons because of AWD. Anyway have a nice day everyone.