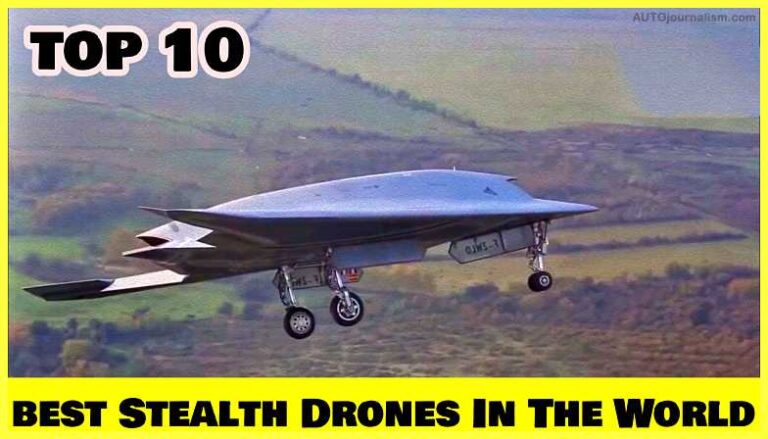 Here is the list of Top 10 Stealth Drones In The World, A stealth unmanned combat aerial vehicle (U-Calves) also known as a stealth combat drone usually carries aircraft armament such as missiles and bombs, these weapons are used for drone attacks by crossing enemy air defense systems. These drones are usually under real-time human control. These types of aircraft with varying levels of autonomy have no onboard human pilot as the operator operates the vehicle from the remote terminal equipment required for a human pilot resulting in less weight and smaller size than a manned aircraft. Many countries have operational domestic U-cabs and many others have imported armed drones or have development programs underway. Let us see the list of Top 10 Stealth Drones In The World.

Ghatak is an autonomous UCAV that is being developed by the Defense Research and Development Organization for the Indian Air Force, capable of flying at an altitude of 30,000 ft or 9144 m, and has rails for U-caps weighing less than 15 tonnes. There will also be a launch. The RDO chief controller for missile warheads and PGMS precision-guided munitions aeronautics stated in 2007 that India’s fighter drone would be a stealth-flying wing concept aircraft with an internal weapons bay and a turbofan engine, starting the U-CAV design. It is similar in spirit to Northrop Grumman’s B2. A prototype will be flight-tested by 2021 with the NPO Saturn 36-mount turbofan engine, then will be powered by a dry Kavari engine version with a thrust of 52 kN

The Kratos XQ-58 Valkyrie is an experimental UCAV designed and built by Kratos Defense & Security Solutions for the United States Air Force’s Low-Cost Attributable Strike Demonstration Program, initially designated the XQ 222. The valkyrie successfully completed its maiden flight on the 5th. At Yuma Proving Ground Arizona in March 2019 the role of the UAV is to escort F-22 or F-35 during combat missions and to be able to deploy weapons or surveillance systems, the aircraft has a dry weight of 1134 kg while its maximum takeoff weight is 2722 kg. It will carry a maximum payload of 544 kg UAV Fly at a cruise speed of 0.72 It can operate at altitudes between 50 ft and 4500 ft. The UAV can achieve a maximum range of 5556 km

The Boeing Phantom Ray is an American demonstration rocket developed by the Boeing UCAV that first flew in April 2011 and will conduct a program of test flights that will include surveillance ground attack and autonomous aerial refueling missions, developers Say it can carry 4500 pounds or 2040 kilograms of payload. The phantom beam is capable of a top speed, of approximately Mach 0.85 with a range of about 2500 km. Further testing will detect missions that may involve intelligence and reconnaissance suppression of enemy air defenses electronic attack and f404 GE 102D Autonomous aerial refueling of a non-afterburning version based on the engine developed for the Boeing FA 18. It is integrated into the Phantom Ray with the GE Boeing exhaust system and includes both single-engine safety features and a full authority digital electronic control system that enables the engines to communicate. with straight plane

The Hongdu GJ-11 Sharp Sword is a stealth unmanned combat aerial vehicle jointly designed by Shenyang Aircraft Design Institute, Shenyang Aerospace University and Hongdu Aviation Industry Group for the PLA Army. To which Sharp Talwar has been assigned to perform deep-penetrating attacks on critical targets and aerial reconnaissance on 21 November 2013, a Sharp Talwar made a 20-minute maiden flight from Higgs airfield, the aircraft had an internal weapons bay and a stealth engine. There is an exhaust nozzle. Earlier reports indicated that it may be capable of carrying up to two thousand pound-class warships into interior bays and using connected satellite data to conduct long-range missions beyond the Chinese mainland. .

The Sergei II or Shahid 171 is an Iranian Turbo Fan Flying Wing New Cave, manufactured by Shahid Aviation Industries, it is based on our Lockheed Martin R170 Sentinel UAV that was captured by Iran and reverse engineered, but smaller than this and quite different. Two Iranian flying wing walls based on the R 170 with the Shahid 171. This l he came out in October 2016. It can internally carry two abruptly one missiles and can land on retractable landing babies. The drone has a speed of 300 kmph, 4.5 hours, a range of 450 km, and a range of 50 kg with a ceiling of 25,000 ft. A payload has expressed suspicion that the Shia weapon is not capable, but they pointed out that it is used for an intelligence surveillance target acquisition platform.

The Dassault Neuron is the experimental UK being developed with an international collaboration led by a French company, the salt aviation countries involved in the project include France, Greece, Italy, Spain, Sweden, and Switzerland, the design goal being a stealth autonomous To make a UAV which can operate in medium to high altitude. Danger Combat Zone The first flight took place on 1 December 2012. The UCAV will be capable of precision-guided air-to-ground strikes from an internal weapons bay and will have a stealth airframe with an air vehicle fuselage with low radar and infrared cross-section. Length and wingspan of about 10 meters, the empty weight of the aerial vehicle is about 4500 kg and with a full payload, the weight would be about 6000 kg. Is. Maximum 0.7 and 0.8. varies between

The UK Ministry of Defense announced that in December 2006 a team led by BAE Systems Taranis had been awarded the contract for the Taranis Unmanned Aerial Vehicle Demonstration Program, the Taranis capable of stealth warfare and defending itself against multiple targets. Manned and other unmanned enemy aircraft, it is designed to fly on continental missions and will carry a variety of weapons that enable it to strike both airborne and ground targets, it will also be able to attack by using stealth technology. Low radar profile and can be controlled through a satellite link. The maximum takeoff weight of a UCAV anywhere on Earth is approximately eight thousand kilograms (eighteen thousand pounds) and is roughly the same size as the Ba Hawk training jet, has two internal weapons bays, and is intended to include full autonomy that allows it to operate without human control. allows operating. for a large part of your mission

The Northrop Grumman X-47B is an unmanned combat air systems carrier being developed by Northrop Grumman for the US Navy, a strike fighter-sized unmanned aircraft currently in its demonstration phase, a program later developed by the United States Navy. Unmanned Combat Air System became part of the demonstration. Program X-47b is a tailless jet-powered blended wing body aircraft capable of semi-autonomous operations and aerial refueling. Between 2011 and 2015, the US Navy conducted two operations as part of a program aimed at exploring the capability. Tested the stealth X-47bs extensively. UCAV was launched by a carrier in August 2014 The US Navy announced that it had integrated the X-47B into manned aircraft as well as carrier operations, U-Cause Electro-Optics Infrared Synthetic Aperture Radar Moving Target Indicator Electronic Support Equipped with measures and sea moving targets. indicator sensor

The UAV, jointly developed by Migun Sukhoi Aircraft Company, made its maiden flight on 3 August 2019 for about 20 minutes. It also flew for 30 minutes on 9 September 2019 with the supersonic stealth fighter Su-57, the UAV is designed to carry a payload of 6000. The kilogram or 13 200 pounds has a flight range of 3240 nautical miles or 6000 kilometers and an operating ceiling of 59 000 feet. The aircraft is capable of carrying air-to-air missiles and reconnaissance equipment, according to the Tass news agency.

The Lockheed Martin RQ-170 Sentinel is an American unmanned aerial vehicle UAV developed by Lockheed Martin and operated by the United States Air Force for the Central Intelligence Agency (CIA), while the USF released some details on the UAV’s design and capabilities. Defense analysts believe that it is a stealth aircraft equipped with aerial reconnaissance equipment, some pictures and details were released on the aircraft after the capture of RQ 170 by Iran in 2011. The RQ 170 Sentinel is equipped with an Active Electronically Scanned Re-radar Synthetic Aperture Radar and Signal Intelligence in its belly. The UAV was deployed in Pakistan in May 2011, flying at an altitude of 50,000 feet during an operation on the premises of Osama bin Laden. Live coverage of the raid was broadcast by vehicle to US President Barack Obama.